After undergoing an elastic MACS lift of the cheeks, this patient also noted a marked improvement in the lateral cervical region. However, some excess skin remained in the central area of the neck. This defect can easily be corrected by means of elastic neck lifting; unlike traditional lifting techniques, this procedure does not require blunt dissection of the skin of the neck. 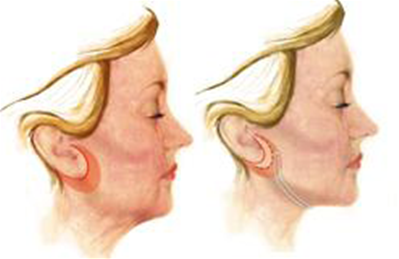 Elastic neck lifting without blunt dissection of the neck. The area of dissection is shown in red.

The skin is placed under tension by applying traction to both sides of the neck. The angle between the submental and cervical regions is marked out with a dermographic pen. The line indicates the pathway of the thread, which will be anchored in Loré’s fascia in a position anterior to the ear. This ambulatory procedure is performed under local anaesthesia. The anaesthetic causes whitening of the skin in the small area of dissection and along the line where the elastic thread is to be implanted. Sedation is optional.
A U-shaped incision is made in the inferior portion of the ear and minimal blunt dissection is performed; dissection involves an area slightly more than twice that of the skin to be removed. The incision and dissection are carried out symmetrically in the contralateral region.
A small incision is made with a n° 15 scalpel in the centre of the demarcation line between the submental region and the anterior cervical region. The two-tipped Jano Needle® passes superficially through Loré’s fascia between the tragus and the earlobe, in order to anchor the elastic thread. The needle is then inserted along the previously drawn line. The operator moves the needle up and down slightly to check that it is progressing at the correct depth; the thread must not be implanted to superficially.
The 16.5 cm Jano Needle® emerges from the small incision made in the central region of the neck. The EP3.5 elastic thread is pulled through. The tip of the needle is then reinserted into the small incision and the needle travels back to Loré’s fascia, following a pathway that is a few centimetres above the previous one. The needle emerges in the preauricular region. A thread is passed through the loop that has been formed as the elastic thread returns. The tip of the Jano needle® now passes through Loré’s fascia in the contralateral periauricular region. The needle is inserted under the line of demarcation between the submental and anterior cervical regions. The elastic thread is pulled through and the needle is completely withdrawn from the small central incision. The needle is passed through the loop formed by the first thread and returns in the opposite direction along a pathway that is a few millimetres above the first one. The two threads are now placed under traction simultaneously by the operator and his/her assistant. As the thread is pulled, the excess skin becomes evident. The threads are knotted. The traction exerted by the elastic threads recreates a pleasing cervical angle. The excess skin is removed anteriorly and posteriorly to the ear. The amount of skin excised is less than it appeared to be after dissection, since some of this skin will fill in the concavity resulting from the restoration of the cervicomental angle.

Elastic neck lifting without dissection: one week later, following removal of the stitches.

This minimally traumatic ambulatory procedure does not require dissection of the neck skin and yields a natural result. Elastic neck lifting can be carried out immediately after liposuction of the neck and cheeks or at the same time as Elastic MACS lifting.

How much anaesthetic is needed for this procedure?

Does this operation avoid blunt dissection of the neck skin?

Yes. In traditional procedures, the neck skin has to be dissected. In this procedure, it does not. This means that the operation is far less traumatic; it can be performed in an ambulatory setting and healing is rapid. If the patient has long hair and no liposuction of the neck and cheeks has been carried out, she does not even have to take time off work.

Can the procedure be performed even in the most severe cases of neck ptosis?

Yes. Obviously, the skin incisions and dissection will be more extensive and elastic neck lifting will have to be preceded by liposuction of the neck and cheeks. When the neck skin droops severely, there is always an excess of adipose tissue.

Anchoring the thread to Loré’s fascia is very innovative, in that threads in the neck have always been anchored to the mastoid process. Does this new strategy involve any risks?

We have never had any problems. Loré’s fascia is thick and tough and the facial nerve is deep.

Does the patient experience any discomfort after implantation of the thread?

No patient has ever complained after implantation of the elastic thread. Even if the thread is placed under considerable traction, it is perfectly accepted after a few days. It should also be pointed out that attaching the thread anteriorly avoids difficulties in breathing or swallowing. Elastic neck lifting is a truly extraordinary procedure and I am very glad to have invented it.

When did you get this idea?

When I attended a course on face-lifting with anatomical dissection in Brussels. The course was held by two surgeons, Pelle Ceravolo and Botti, who proved to be very able teachers and who were very well-prepared (as indeed was the rest of their team). As I have always been interested in innovative techniques, I set about investigating the feasibility of deep face-lifting beneath of periosteum of the zygomatic arch, an idea that I have since abandoned. However, during the course, I realised that Loré’s fascia would make a perfect point of anchorage for the elastic thread. This idea fits in with the spirit of my procedures, which must be ambulatory, conducted under local anaesthesia, as efficacious as possible and minimally traumatic, involve minimal dissection and offer rapid restitutio ad integrum. If I think that one of my patients went out to dinner on the same day as she had undergone neck lifting, I am truly satisfied with this procedure!

Is it possible to perform elastic neck lifting with a single thread, without making the submental incision?

Yes. In this case, the 16.5 cm needle is rotated through 180° and there is only one knot at the first entry point of the needle. Indeed, we now commonly use a single thread. Two elastic threads may, however, be used to tighten up the skin if there are residual skin folds under the chin.

Today, it is preferable to correct necks with drooping skin by means of elastic neck lifting with safety pins (video 41). This recently designed procedure utilizes two elastic threads, one on each side, which are connected to each other. The parallel threads implanted are connected at two or four points through 2 mm incisions. Connecting the two parallel threads maintains lateral traction on the tissues and prevents the skin from sliding downwards to the anterior region of the neck and forming a fold.
As only two lateral incisions are made, these are positioned about 3 cm from the medial edge of the sternocleidomastoid muscle. None of the neck-lifting procedures requires tissue dissection. (31/10/19)

In video publication (8), an incision has been made in front of the ear and blunt dissection has been carried out. Today, this can be avoided. During this procedure, the excess skin following dissection is markedly reduced after the implantation of the elastic thread, which restores the cervico-mandibular angle. For this reason, incisions and dissections in this region can be avoided, thereby obtaining aesthetic and trophic advantages.
The use of two elastic threads can also be avoided; one thread between the two fasciae of Loré can be used.
The minimal amount of skin that is removed from the lateral region of the face clearly indicates that dissection of the cervical region is unnecessary. The skin of the neck can simply be repositioned laterally, where it corrects the scrawny appearance of the neck (typical of the elderly) and upwards, where the excess skin is used to cover the restored cervico-mandibular angle.
The procedures currently applied to the neck are: horizontal liposuction to treat a double chin by means of a 2 mm cannula; and the implantation of an elastic thread between the two fasciae of Loré, to restore the cervico-mandibular angle. The first pathway of the elastic thread is deep within the natural cervico-mandibular angle. The second pathway is about 1 cm from the first; it may be positioned inferiorly, to lift the lower neck skin upwards, or superiorly, to support the slack submental tissues. The elastic threads exerting traction on the platysma, which are anchored to the fasciae of Loré, reach the point of traction 2 cm or 3 cm from the median anterior line of the neck. Here, the Jano needle is rotated, is displaced by ½ cm or 1 cm from the first pathway, and returns in the opposite direction, emerging from the entry incision, where the two ends of the elastic thread are tightened and knotted. In lifting of the lower neck, the skin and tissue volumes of the neck are repositioned laterally by means of the efficacious traction triangles.
The more lateral suspension threads implanted in the cheeks (elastic lifting of the cheeks without dissection and elastic MACS lift) also have an effect on the neck region.
Regarding the incision in front of the lower part of the ear, we no longer do this, nor do we remove the skin in this region.
Elastic lifting of the upper neck is carried out during elastic MACS lifting. An incision is made which runs around the lower part of the sideburn and stops at the tragus; a tunnel is then created immediately above the fascia of Loré. If the patient requests only neck lifting, an 8mm incision is made behind the lobe of one ear, to restore the cervico-mandibular angle; if traction needs to be applied to the submental platysma, incisions are made behind both earlobes. We consider it unnatural to apply excision and traction to the platysma through submental incisions. (30/07/15)