Timedsurgical mixed peeling is the technique of choice for the permanent elimination of lip wrinkles, even if they are deep. Mixed peeling can also be used to eliminate the effects of ageing on the skin of the lower eyelids; these effects may range from slight roughness to evident wrinkles and large folds, as in this patient.
The effects of skin ageing in the palpebral region are difficult to correct by means of surgical techniques. However, if the overall appearance of the face is to be successfully rejuvenated, skin ageing of the eyelids needs to be treated. Just think of a face that has been rejuvenated by means of elastic lifting, but which still has aged skin in the palpebral regions. Poor quality of the palpebral skin can even spoil the result of perfectly performed surgical blepharoplasty. Indeed, to be effective, facial rejuvenation must be complete and must therefore also involve the skin of the eyelids.
The mixed peeling shown in this video consists of pulsed timedsurgical de-epithelialisation, followed by the application of a solution of resorcin. Mixed peeling is a safe technique and its efficacy is ensured.
The skin area to be rejuvenated is marked out with a dermographic pen. The outline also encompasses the crow’s feet, if they are particularly evident. The local anaesthesia used is a solution of lidocaine and epinephrine.
The Timed apparatus (Timed – Korpo, Italy) is programmed with the following settings: DIRECT PULSED 4/9 hundredths of a second, 2 Watts, Coag, EM 10 Yellow (edge of the angle).
De-epithelialisation is carried out with the edge of the angle of an EM 10 Yellow electromaniple. The operator bends the electrode in order to obtain a suitable surface. The angle of the electrode brushes the skin in small circular movements. The specific current of the Timed apparatus detaches the epidermis from the dermis, while preserving the integrity of the dermal papillae and of the capillary-papillary complex. The procedure is performed under a magnifying lens.
The electrode is cleaned frequently. The contact surface between the electrode and the skin must be minimal, in order to concentrate the energy efficaciously. To improve conductivity, the operator moistens the skin with gauze soaked in physiological solution. The deactivated electrode is used to remove the epidermis that has been detached by the timedsurgical current. Once the epidermis has been removed, the dermis is seen to be intact. There is no bleeding, as we are working above the capillary plexus of the dermal papillae. First performed more than 15 years ago, this procedure is still perfectly up-to-date and is the first of a series of procedures to rejuvenate the skin of the eyelids that will be published on the Medical Video Journal. It will be interesting to evaluate the indications and the results of the different timedsurgical mixed peeling procedures in the palpebral regions. The procedures will also involve the upper eyelid and the possibility to perform cutaneous “blepharoplasty” by means of one of the most recent mixed peeling techniques. As we know, mixed peeling elicits the reorganization of the connective fibres and the permanent thickening and retraction of the skin. In this way, we can correct the unsightly effects caused by ageing of the palpebral skin, by drooping, by the movements of the eyelids, by volume loss and by all those factors that cause stretching and thinning of the skin and the formation of wrinkles.
Pulsed timedsurgical de-epithelialisation was designed to repigment the skin in cases of vitiligo and piebaldism, in which it enables the achromic epidermidis to be replaced by a graft of autologous keratinocytes and melanocytes cultivated from a 1 cm² fragment of intact skin.
On completion of de-epithelialisation, a resorcin solution is applied. Before the procedure begins, a small amount of resorcin in powder form is placed in a container together with a few drops of physiological solution. Having terminated the de-epithelialisation phase, the operator should see a little resorcin powder on the bottom of the container; this shows that a saturated solution has been made. The operator then aspirates 1 ml of saturated resorcin solution and 1 ml of physiological solution with a syringe. This new 50% solution is placed in another small container and applied to the de-epithelialised area with a cotton-wool bud. Resorcin is neither acidic nor alkaline, and has no effect on intact skin; it only acts on de-epithelialised skin.
After about 20 seconds, “frosting” will be seen. The resorcin is then removed by means of a gauze soaked in physiological solution.
The contralateral lower eyelid is then de-epithelialised.
The edge of the angle of the 0.2 mm diameter EM10 Yellow electromaniple brushes the surface of the skin in small circular movements. The epidermis is detached from the dermis by the specific current of the Timed apparatus; it must not be removed mechanically. When activated, the electrode must not touch the dermis, but only the epidermis. If the current touches the dermis, it may dehydrate it, thereby preventing the resorcin from being absorbed uniformly. Mixed peeling is so called because it blends physics and chemistry. The mixed peeling procedure that you can see is highly efficacious, as de-epithelialisation enables the solution to act on all the geometric points of the de-epithelialised surface. De-epithelialisation is particularly indicated for the elimination of lip wrinkles and for the rejuvenation of the lower eyelid. Both of these regions are well-circumscribed aesthetic units. In the following videos, we will see mixed peeling procedures that enable us to act in a non-uniform manner.
The resorcin solution is applied.
A thin crust forms after a few hours. The patient should frequently dry the treated areas with a paper tissue. Creams and other substances must not be applied. After 10 or 15 days, the crust drops off, leaving reddened skin without wrinkles; the area can easily be masked by means of a coloured cream.
The procedure is over.
The patient before and after timedsurgical mixed peeling. 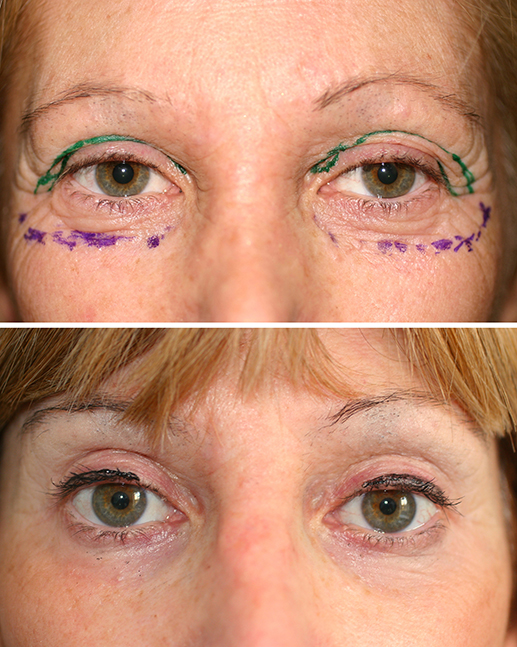 This video clearly illustrates the importance of rejuvenating the palpebral skin. What other techniques are able to do this?

Rejuvenating the skin of the upper and lower eyelids is of great importance to rejuvenating the overall appearance of the face. I believe that mixed peeling procedures will be widely used once the importance of skin rejuvenation has been fully grasped. The only technique that is able to retract and thicken the skin is mixed peeling, which is a standardised and consistently efficacious procedure; no other technique can do this. The result of mixed peeling can be further improved through volume enhancement, which is achieved by means of injecting adipose and stromal cells (Adipofilling).

The de-epithelialisation is the same. To eliminate lip wrinkles, a saturated solution of resorcin is applied to the de-epithelialised skin. To treat the eyelid, the resorcin solution is not saturated; it is diluted to 50%. The application times are also different: from 1 to 2 minutes on the lips, and about 20 or 30 seconds on the eyelids. The operator has to judge by the frosting effect.

Why is no type of medication used?

The resorcin solution exerts a coagulating effect. Within a few hours, a crust forms, which prevents infection. The patient has to dry the area repeatedly during the first few hours, in order to keep the crust thin.

In this video, while the resorcin solution is being washed off, a little resorcin gets into the patient’s eye…

Yes. We always keep a vial of physiological solution handy so that the eye can be washed if this happens. But resorcin is very safe. When applied to intact skin, it has no effect; on the mucosa, it can cause discomfort, but not damage.

What are the indications for this timedsurgical procedure?

Roughness of the lower eyelid, palpebral folds, crow’s feet and pigmentation of rings under the eyes.

Is de-epithelialisation also carried out on the upper eyelids?

We have never done it. In the upper eyelids, we prefer to use another mixed peeling technique (0.5), which perfects surgical blepharoplasty and, in many cases, replaces it. This technique will be published in 2016.