09. Adipolysis, percutaneous correction of malar pouches, immediately after upper and trans-conjunctival blepharoplasty with the Timed

This patient is to undergo upper and trans-conjunctival blepharoplasty by means of rapid pulsed timedsurgical cutting. Her malar pouches will be corrected by means of timedsurgical Adipolysis.
A partially insulated electrode inserted through the skin will eliminate the pouch by vaporizing the superficial and deep adipose cells.
Before the procedure, the operator draws lines on the skin to indicate the palpebral skin to be removed and the area where the malar pouch is present.
Local anesthesia is carried out by means of equal amounts of 2% mepivacaine and 2% lidocaine. We add ½ mg – 1 mg of epinephrine to the 10 ml vial of mepivacaine.
The operation begins with upper blepharoplasty. The Timed apparatus is set to 27 Watts, in the function “Cut” and the rapid pulsed cutting modality. The operator incises the skin along the lines previously drawn, without burning the edges of the incision. This particular type of cutting enables the stitches to be removed after only three days! An EM 10 White electromaniple is used, the tip of which is flexible and conical with a triangular cross-section of 0.08 mm. The flexible tip cuts by exploiting the elastic return of the electrode under tension. No hand and no instrument can equal the speed of timedsurgical cutting. This explains the absence of burning at the edges. The incision is extremely precise. The operator can choose whether to incise the skin exactly along the center of the line drawn preoperatively or along its upper or lower margin.
Once the skin has been incised at 27 Watts, the power of the Timed apparatus is increased to 50 Watts and the EM 10 White electromaniple is replaced with an EM 10 Green or an EM 10 Grey electromaniple, the diameters of which are 0.10 mm and 0.15 mm, respectively. The skin is then excised.
After removal of the skin, the septum orbitae is incised and the palpebral fat is removed. The patient is asked to make a sign if even the slightest pain is felt. A feeling of pain means that the local anesthetic has not spread adequately throughout the tissues and the epinephrine contained in the solution has not been able to exert its vasoconstricting effect, an effect which is necessary in order to maintain the operating field bloodless. Bleeding can also be prevented by injecting the anesthetic into the adipose pouches before their traction and removal.
The thin electrode allows perfect visibility, which is important for hemostasis. The operator patiently removes only the adipose pouches.
Spiral suturing begins from the lateral extremity of the incision in both eyelids. Once the first eyelid has been sutured, the 6 – 0 nylon thread is not knotted, but is left long so that it can be knotted with the thread suturing the contralateral eyelid.
Trans-conjunctival blepharoplasty is carried out through two 1 cm incisions, one lateral and one medial. Incision of the mucosa is carried out with the EM 10 White electromaniple at 38 Watts. After this incision, the power of the Timed apparatus is increased to 50 Watts and the EM 10 White electromaniple is replaced with an EM 10 Green or an EM 10 Grey electromaniple.
The fasciae covering the adipose pouch are incised. A Klemmer is used to grasp the adipose pouch. Before the pouch is removed, local anesthetic is injected around it in order to facilitate hemostasis and avoid any pain that may be caused by its traction. The fatty pouch is freed from the surrounding tissues.
The larger-sized electrode exerts a lesser cutting effect and a greater coagulating effect. After removing all the removable fat, we incise the mucosa in the medial portion of the conjunctiva. Through this incision, we complete the removal of the adipose pouches. These incisions do not need to be sutured. The orbicular muscle is undamaged. As the skin adapts to the concave surface that we have created, excision is rarely necessary.
Having completed blepharoplasty, we correct the malar pouch. For this purpose, we use an insulated EM 10 Green or an insulated EM 10 Grey electromaniple, from the tip of which the last 2 mm of Teflon insulation is removed. The Timed apparatus is set to the resurfacing function in the “Coag” mode, at 27 Watts or 38 Watts. The back-and-forth movement of the partially insulated electrodes vaporizes the adipose cells, reducing the volume of the subcutaneous tissue and causing the skin to retract. Vaporization by means of the resurfacing pulsed current is carried out both in depth and superficially, immediately beneath the dermis. When the electrode is more superficial, the heating action of the pulsed current is checked by touching the skin with a fingertip. The vaporizing action also extends around the malar pouch. It is important to correct malar pouches after lower blepharoplasty; if they are not treated, they will become more evident owing to the removal of the palpebral fat.
The treatment of large malar pouches requires more than one session. Nevertheless, the simplicity and minimally invasive nature of timedsurgical Adipolysis are of great satisfaction to the patient.
After six months, correction of the malar pouches proves to have been optimal. The patient requires no further corrective intervention. 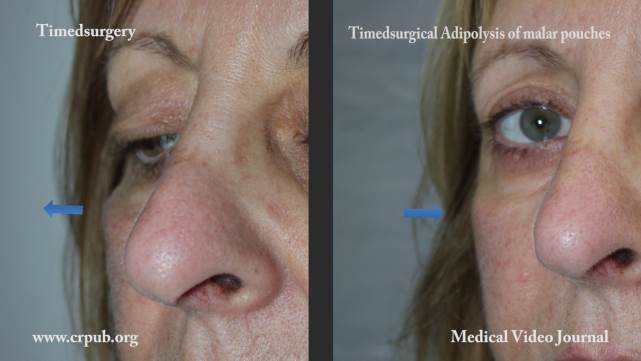 What advantages does rapid pulsed timedsurgical cutting have over scalpels and lasers?

Lasers burn the tissues and are difficult to control. A scalpel can certainly be used, but for palpebral surgery we prefer to use rapid pulsed cutting because it is hemostatic, does not deform the tissues, enables the skin and muscles to be incised with great precision, allows perfect visibility and halves the healing times required for scalpel incisions. Moreover, when pulsed timedsurgical cutting is used on the mucosa, for example on the vermilion border, it does not leave any visible scars.

What are the characteristics of the electromaniples?

The electromaniples are used to carry out the numerous (more than 70) standardized techniques of Timedsurgery. The EM10 electromaniples have flexible, conical tips with a triangular cross-section; they come in different sizes for use in the various applications (EM10 White 0.08 mm, EM10 Green 0.10 mm, EM10 Grey 0.15 mm, EM10 Yellow 0.20 mm, EM10 Black 0.30 mm. The EM15 has a 1.5 mm cylindrical tip).

In the lower eyelid, are the adipose pouches completely removed?

Yes, completely. The adipose pouches of the eyelids retain water and swell according to the amount of sodium in the diet or as a result of dietary intolerance. If the region has little subcutaneous tissue, we can also perform Adipofilling, which can correct the lachrymal sulcus and bags under the eyes or enhance the volume of the malar region.

Some surgeons say that adipose pouches in the lower eyelid should not be removed completely. What do you think of that view?

Congenital weakness of the septum orbitae allows the retrobulbar adipose tissue to herniate through to the surface. Adipose pouches therefore occupy an anatomically anomalous position. This alone is sufficient reason to remove them. Moreover, in addition to eliminating swelling of the eyelids, the complete removal of adipose pouches creates a recess that distends the skin. This is very useful in trans-conjunctival blepharoplasty, in which the skin is almost never removed. If we wanted to be a little malicious, we could say that removing all the pouches in lower blepharoplasty requires a degree of patience that not all operators have.

During vaporization of the tissues of a malar pouch, what can be felt with a fingertip when the electrode is superficial?

Heat. This heat also provides an indication of the depth of the electrode.

Do you have any other advice concerning this procedure?

I advise extending vaporization to the margins of the malar pouch in order to exploit the retraction of the tissues.

What can be done to prevent malar pouches from recurring?

The patient should undergo elastic lifting of the eyebrows and temporal regions. The lachrymal sulcus and the malar region can be corrected by means of Adipofilling. Naturally, an elastic MACS and Neck lift would have a further rejuvenating effect.

Is there any fibrosis of the subcutaneous tissue after Timedsurgical Adipolysis?

There is no visible fibrosis; Adipolysis specifically eliminates the adipose cells, and the micro-tunnels, though numerous, are too narrow to give rise to permanent hardening of the tissues; they do, however, have an effect on the retraction of the skin.

Upper blepharoplasty is the first esthetic surgery procedure used to counteract aging. Is that right?

Yes, but upper blepharoplasty is not only an esthetic procedure; it also has a functional effect. Removing the herniated fat enables the eyelids to be opened wider and more easily. 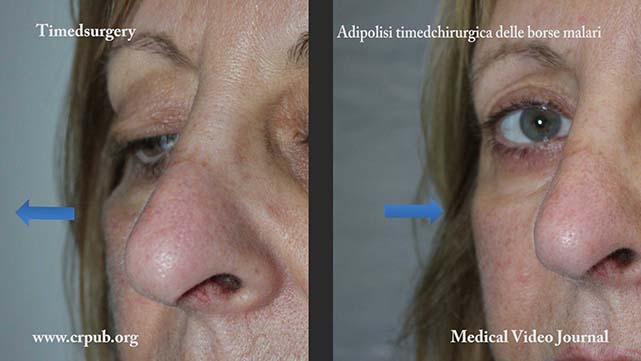