04. From Sclerotherapy and Ablation Surgery to Phlebotherapy (TRAP): key concepts

Varicose veins that are visible to the naked eye, on transillumination or by means of near-infrared reflection and absorption techniques, constitute only the effect of varicose disease. To cure varicose disease, we have to treat the cause; this can only be done by regenerating the vessel walls. Regeneration means restoration of the altered vascular structure and function.
Current sclerotherapy treatments, phlebectomy and functional ligature are irrational because they are two-dimensional techniques which act on the effect of the disease, not on its cause. Such treatments, which are not free from side-effects, destroy the normal anatomy of the veins and cannot achieve the desired result: the disappearance of all the visible veins and the functional recovery of the venous circulation.
In order to understand how this result can be achieved, we need to recognize the true causes of varicose disease.
Varicose disease has a biological cause and an anatomical cause. The biological cause is the congenital miopragia of the walls of the vessels of the superficial and perforating circulation. The deep veins and the saphena are better protected by the robust sheaths that envelop them.
In order to understand the anatomical cause, we need to consider the venous circulation in the lower limbs as part of a pump which enables the blood to travel up the leg from the foot to the abdominal region. The motor of this pump, or “peripheral heart”, is constituted by the calf muscles, which are able to generate high pressure: 300 mmHg.
Congenital weakness of the walls of the perforating veins, which convey the blood from the superficial circulation to the deep circulation, causes these veins to dilate and their valves to become incontinent.
When the muscles of the peripheral heart contract, some of the blood that should be pumped to the right atrium escapes into the superficial circulation, which becomes dilated. Haemodynamic hypertension produces different clinical effects, depending on the miopragia of the walls of the veins of the superficial circulation. If the walls of the superficial veins are very weak, evident varices will form and no telangiectasias will be present; in such cases, phlebotherapy is more rapid. By contrast, if the walls of the reticular veins can withstand the increased pressure, venules and telangiectasias will form. Ectatic veins in the lower limbs therefore represent an “escape valve” for the haemodynamic hypertension generated by the valvular insufficiency of the perforating veins. Thus, venous ectasia is caused by the blood that escapes from the deep circulation.
Obviously, removing or obliterating the escape valve without correcting the anomalous hypertension, as the traditional techniques do, does not treat the circulation; it merely produces new varicose veins and high-pressure telangiectasias (matting).
Moreover, miopragia is not restricted to a limited anatomical region; rather, it involves the entire perforating and superficial circulation. This means that treatment must be extended to the entire superficial and perforating circulation, and not be restricted to those areas where highly visible veins are present. Haemodynamic hypertension caused by the insufficiency of the perforating veins must be regarded as the main cause of varicose disease. There are 150 perforating veins, almost all of which are too small to be seen on Doppler imaging.
With regard to hydrostatic pressure, the valvular and ostial insufficiency of the great saphena is of only marginal importance, since the pressure at the ankle ranges from 70 to 100 mmHg, depending on the height of the column of liquid, whether the valves are continent or not. Indeed, the valves do not break up the hydrostatic pressure. Some individuals are even born without saphenous valves, and yet they do not develop varicose veins; by contrast, subjects with continent valves both in the saphena and in the superficial femoral vein may have evident varicose veins.
While the hydrostatic pressure in the veins at the ankle is of only modest importance, a far greater role is played by hydrostatic thrust; this is the force that the blood exerts perpendicularly to the venous wall, and it is this force which tends to dilate the vein. Hydrostatic thrust is the product of the pressure multiplied by the internal diameter of the vein and by a height of 1 cm. Its effect was elegantly demonstrated by the French scientist and philosopher Blaise Pascal in his famous “barrel experiment”. 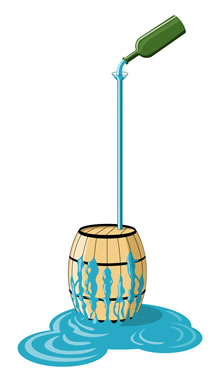 Unfortunately, hydrostatic thrust has been completely ignored by official phlebology, which has always focused on transmural pressure, a value that is relative, not absolute.
If a vessel is dilated, the internal pressure acts on a larger surface area, thus developing greater force. The greater hydrostatic thrust is not due to the greater quantity of blood in the vessel, but rather to the greater internal surface area of the dilated vessel.
Let us consider two veins, one with a constant diameter of 10 mm and one with a diameter of 5 mm for most of its length and of 20 mm in the last few centimetres. Both veins are 1 m long. In both veins, the hydrostatic pressure at the lowest point is the same. The hydrostatic thrust, however, is different. In the second vein, the most distal portion of which is dilated, an ulcer may form, even though this vein contains less blood.

These considerations highlight the importance of reducing the diameter of the vessels in the most distal regions of the limbs, where the incontinence of the perforating veins generates the highest haemodynamic pressure.
In varicose disease, the following mechanism is hypothesised: miopragia of the vessel walls, dilation of the perforating veins, valvular insufficiency, haemodynamic hypertension, dilation of the veins, increased hydrostatic thrust, oedema and compression of the tissues at the ankle, trophic disorders, ulcer.
These considerations have prompted us to adopt a completely different therapeutic approach. Instead of obliterating or removing the veins, we regenerate the venous walls.

Finally, it should be pointed out that varicose disease is the most common disease in the world. As such, it deserves the greatest attention. Likewise, patients have a right to proper treatment!

How many years of research were required in order to revolutionise phlebology and send into retirement the traditional techniques of treating veins: sclerotherapy, saphenectomy, multiple phlebectomy, functional ligature, laser etc.?

We have been working on this since 1993, the year in which we created the solution that, when appropriately diluted, enabled us to regenerate the walls of the veins.

How has TRAP been received by patients ?

Patients see it as their last hope of solving their venous problems. Even though it is young, TRAP is able to do this.

How has TRAP been received by colleagues?

With great interest, especially by the youngest and the oldest doctors. If you key in the word “Phlebotherapy” on the Internet, you will find, as of now (January 2011), 1350 references. When I coined the term “Phlebotherapy”, this word did not exist on the Internet.  TRAP is spreading very rapidly, and the patients themselves are contributing to the spread of this new treatment every year, I am always invited by the Société Française de Phlébologie.

In this video, I notice that a larger syringe (12 cc) and a 26 G needle are used. Why have you modified the technique of injection?

This video is a completion and a simple update of the previous ones. By using a larger syringe, we can inject a greater amount of regenerative solution in each single injection. A greater amount of solution comes into contact with a greater endothelial surface, making the result more rapid and more stable. It must be borne in mind that we have to treat the walls of the non-visible vessels, which constitute the rich network of perforating and communicating vessels that connect the superficial circulation with the perforating circulation.

What do you think of the laser?

Even without making any reference to the conservative concepts of TRAP, multiple phlebectomies no longer have any reason to be performed. The only reason why they used to be carried out was that they did not leave permanent post-sclerotherapy pigmentation, as the old sclerosing solutions did. Today, by using the solution of sodium salicylate in a hydroglycerine vehicle at sclerosing concentrations (6%, 8%, 10%), we can sclerose veins without causing permanent post-sclerotherapy pigmentation. Obviously, it is much better to perform a simple injection than to strip out a vein. We should also remember that stripping out a vein often causes damage to nerves and lymphatic vessels, leading to oedema and paresthesia.