This patient requested a mastopexy to correct ptosis of the breasts, which were pendulous and slightly asymmetrical. We perform mastopexy by means of a vertical incision, a procedure that was designed in the 1950s by my mother, the plastic surgeon Flora Spolidoro.

The old slides below show a patient standing after one breast had been treated and before treatment of the other breast. 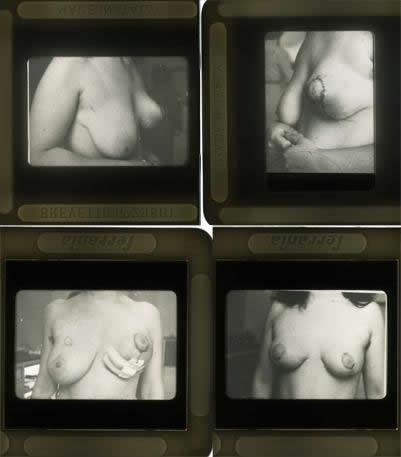 This procedure, which used to involve implementing Schwartzman’s manoeuvre, was later modified through the introduction of de-epithelialisation of the area of skin removed. Recently, in order to improve the quality of the periareolar scar, round block has been performed with the elastic thread (Elasticum® Korpo SRL) equipped with a two-tipped needle.
While the patient is standing, a landmark point is marked on the jugular; another two points are then marked, one on either side of the landmark point, at a distance of 4 cm. From each of these two points, a line is drawn which runs over the nipple and down to the inframammary sulcus. Two points are then marked on each line at 18 cm and 20 cm from the jugular. The midsternal line and the inframammary sulcus are drawn. A circle of 4.5 cm in diameter is used to draw the areola, which will be reduced. The skin shield in the lower portion of the breast is determined by pinching the breast with four fingers. 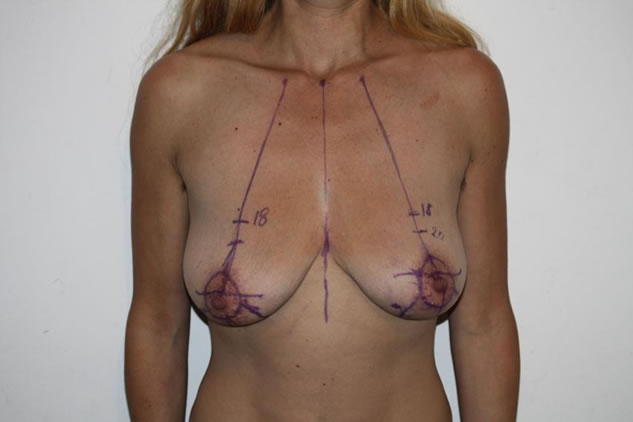 The procedure begins with the administration of a local anaesthetic; about 60 ml of 1% lidocaine with epinephrine is sufficient for this ambulatory procedure. Once anaesthesia has been carried out the necessary landmark stitches are put. De-epithelialisation of the skin is then performed, followed by Schwartzman’s manoeuvre around the areola. The operation is exclusively cutaneous. Our experience over many years has shown that there is no need to intervene on the gland in order to achieve long-lasting lifting of the breast; it is sufficient to work on the skin. This means that the procedure is less traumatic and can be carried out perfectly well in an ambulatory setting. Operations involving the mammary gland always result in a reduction of breast volume, even after a few years. This reduction is due to the vascular and cicatricial alterations to the breast tissue that aggressive operations cause. The ensuing loss of breast volume causes drooping to recur.
By contrast, an exclusively cutaneous procedure like Spolidoro mastopexy not only causes little damage to the breasts but also enables the patient to go home immediately afterwards and to return to work after two days.
Once the skin has been de-epithelialized, its inferior apex is incised in order to remove a small amount of adipose tissue. The fat has to be removed in order to raise the inframammary sulcus. In some patients, we use liposuction to remove the fat.
Next, spiral dermal suturing is carried out with a reabsorbable material. Suturing begins a few centimetres from the inferior apex of the shield, in order to allow a further amount of adipose tissue to be removed, if necessary. The spiral suture terminates halfway along the wound). The superior half of the wound is closed by means of widely spaced cutaneous stitches. The areola is now covered by skin. The same procedure is carried out on the contralateral breast. Once this phase has been completed, the operation becomes “cut as you go”. The patient is raised from the operating table and the form and symmetry of the breasts are assessed. The vertical “pinching” effect renders the breast conical. To achieve a harmonious shape, a horizontal “pinching” effect is required; this is obtained by removing the skin around the areola. In this patient, the new site of the areolae was marked out by means of a 7 cm diameter circle. Using a large circle enables the distance between the areola and the inframammary sulcus to be reduced without having to make a T-shaped incision.
While the patient is seated, the operator evaluates and marks out any corrections that need to be made; any such correction will begin with the further removal of adipose tissue under the new inframammary sulcus.
The breast cones must be symmetrical and oriented upwards. Symmetry is achieved by removing strips of skin from the edges of the wound, wherever necessary. If there are visible differences in volume, these must be corrected by means of liposuction before suturing. Even in cases of modest hypertrophy, we use liposuction.
The new enlarged site of the areola is now de-epithelialized; the modified position of the areola equilibrates the conical shape created by the vertical suture.
The cardinal points of the areola are now sutured. A scalpel or tweezers are used to create a pocket in which to bury the knot of the elastic thread (Elasticum®, EP3.5, Korpo SRL) and the two-tipped Jano needle® is inserted in order to create an elastic round block. The two-tipped needle is never completely extracted until suturing has been completed. The pathway of the needle forms a complete circle. The Jano needle enables the elastic thread to be implanted at a distance from the edges. Once the circle has been completed, the elastic thread knotted and tightened until the desired narrowing effect is achieved. The elastic round block permanently removes tension from the areolar suture. As the edges of the incision in the periareolar skin are not subjected to tension, the scars will be of good quality.
Round block is now performed with the Elasticum® thread on the contralateral breast. The Jano needle® is never completely extracted, as one of its two tips always remains within the tissues. The elastic thread always follows the path of the anterior tip of the needle). On completion of the round block, the areolar skin is sutured without tension. At this point, the patient is made to sit up so that the symmetry of the breasts can be checked. In this patient, the vertical incision in the right breast was slightly curved, which necessitated a minor correction. The left breast proved satisfactory. A trace of the excision of a supernumerary nipple can be seen along the “breast line”. The small folds around the areola will disappear within a few days. After a year, the vertical scar will hardly be visible. The absence of a T-shaped scar will allow the patient to wear whatever clothes she wishes. This “cut as you go” procedure achieves a truly natural breast shape. 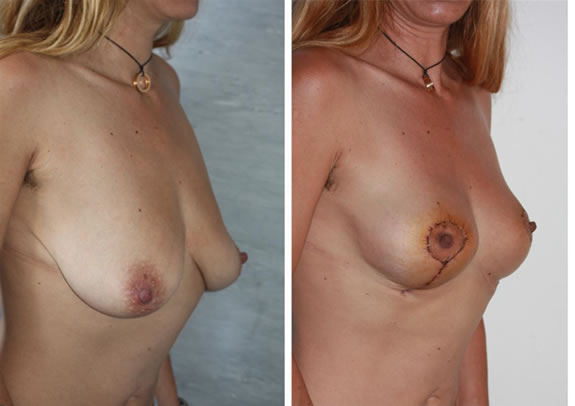 Two weeks after the procedure, when the stitches were removed.

Is exclusively cutaneous suspension able to yield a stable result?

The skin is perfectly capable of supporting the breast, which is a cutaneous appendage. Aggressive manipulation of the mammary gland is deleterious because it reduces breast volume.

Do all procedures that damage the integrity of the mammary gland lead to a loss of volume?

Yes, in my experience, they do. In mastopexy, it is advisable to maintain the volume of the breast, as a subsequent loss of volume causes breast ptosis to recur. Understandably, any incision of the mammary gland, for example to create an anchorage to the fascia, or for a flap, will cause vascular damage that influences the trophism of the breast. Even extensive tissue dissection, such as in traditional face lifting, and even the dissection performed in rhinoplasty, leads to visible hypertrophy of the subcutaneous tissue after a year. If possible, it is preferable to avoid damaging the vascularisation and innervation of the tissues.

Is the fact that the scar runs beyond the new inframammary sulcus a problem?

No. The scar is not very visible and largely remains in the mammary fold; it can easily be mistaken for a mark left by a bra. In the case of very evident ptosis, the vertical scar can be reduced in length by means of a intradermal suture.

Can the vertical scar widen?

Yes, if the patient cannot tolerate reabsorbable dermal stitches. In this case, we carry out scar revision by means of the elastic thread and the Jano needle.

Does elastic round block always have to be carried out? Is the two-tipped Jano needle always used?

The elastic thread is very useful in round block. The continuous elastic traction of the thread yields a very good scar. For what concerns the Jano needle, now we more often use the Elasticum thread with a 3/8 circle needle, which costs less.  Using the elastic thread and Jano needle is nevertheless an extraordinarily efficient approach. For example, if, at the end of the procedure, we realise that the areolae are not positioned on the same horizontal line, we can remove a “half moon” of skin in order to raise the lower areola. When suturing is complete, the two areolae may have different diameters; the areola that has been modified by removing the “half moon” of skin may have a larger diameter. To restore symmetry, there is no need to re-suture. It is sufficient to make a small incision at the inferior edge of the larger areola and to implant a new elastic thread by means of the two-tipped needle; this new thread will reduce the areola to the same size as the contralateral areola.

Is this an ambulatory procedure?

Yes. When the mastopexy is over, the patient can go straight home and, after a few days’ rest, can resume normal activities.

Was your mother the first Italian plastic surgeon?

Yes. My mother (b. 1916) worked as an assistant surgeon in Normal Human Anatomy and General Surgery. She began to practise plastic surgery on casualties wounded during the war. She subsequently took up aesthetic surgery; that was when she created this procedure. When I was 19 years old, I began to assist her with surgical operations. After graduating, I was able to make my own contribution.

Spolidoro mastopexy is an up-to-date procedure. It can be adapted to any type of drooping breast and has the advantage of not requiring glandular flaps or tissue dissection. The creation of flaps and the dissection of mammary tissues are harmful, as they cause vascular and trophic damage. Reduced trophism leads to volume reduction and, consequently, the recurrence of drooping.
Today, Elastic Plastic Surgery enables us not only to reduce the traction of the areolar suture, but also to shape the mammary apex and to suspend the breast from the thoracic skin, thereby stabilizing it over time. A further effect of this suspension is to fill out the upper pole of the breast. Elastic suspension threads can also be implanted some time after the mastopexy procedure. Combining a minimally invasive procedure like Spolidoro mastopexy with a new technology involving an elastic surgical thread a two-tipped needle enables us to achieve long-lasting high-quality results.