38. Basic Elastic MACS and Neck Lift without dissection of the cheeks and neck, step-by-step

The video illustrates all the phases of this ambulatory procedure, which is carried out under local anaesthesia through a very short incision that surrounds the lower part of the sideburn and stops at the tragus.
In MACS and Neck Lifting by means of the elastic thread and two-tipped needle, the cheeks and neck are not dissected.
The absence of dissection avoids trophic damage to the tissues of the face and neck.
The procedure is performed when the skin at the sideburns can be pitched between two fingers.
The aim of this procedure is not to make the patient more beautiful, but to rejuvenate the face and neck in a natural way. 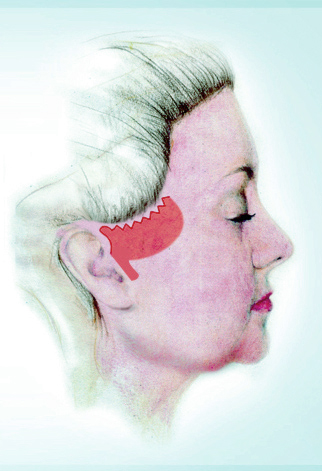 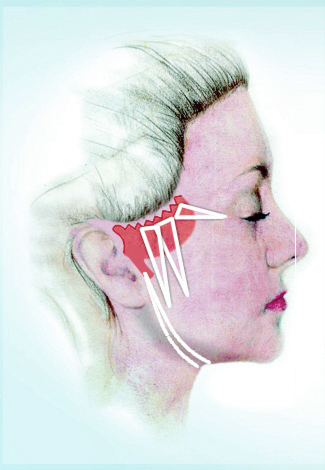 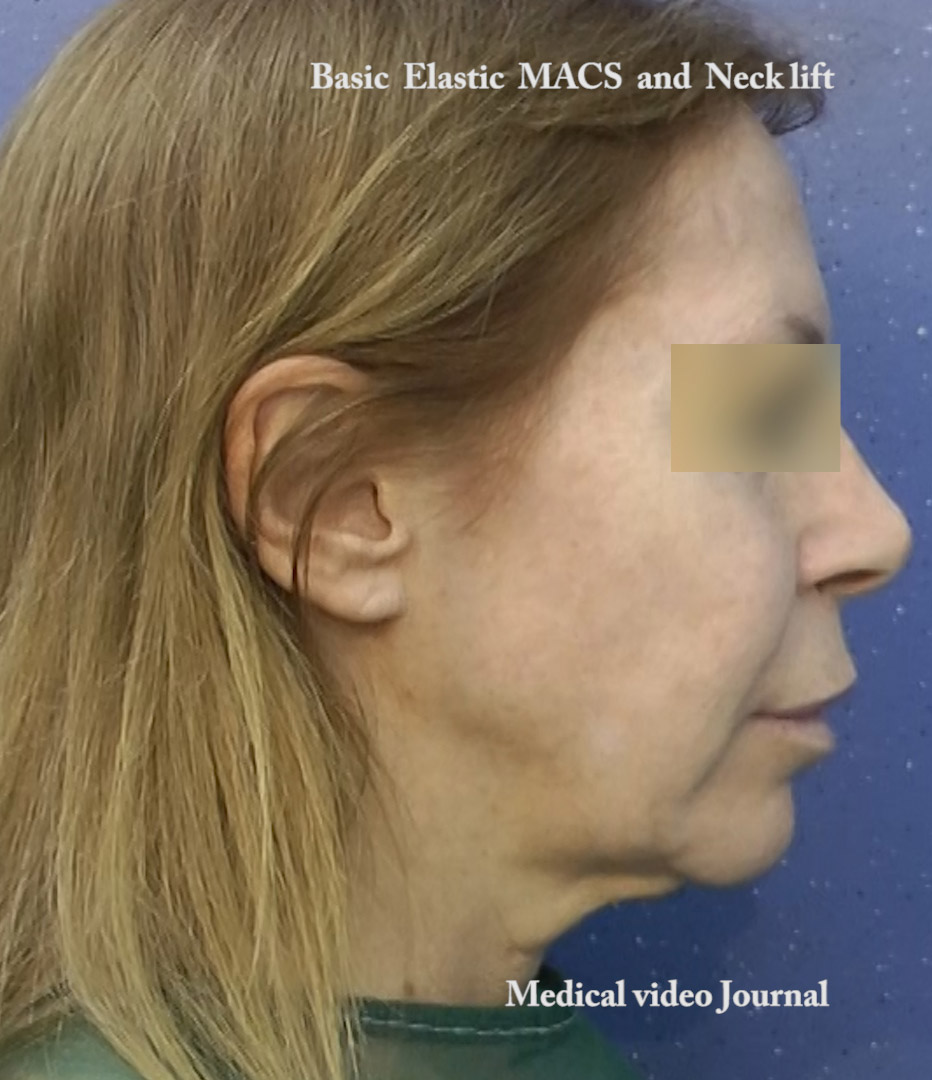 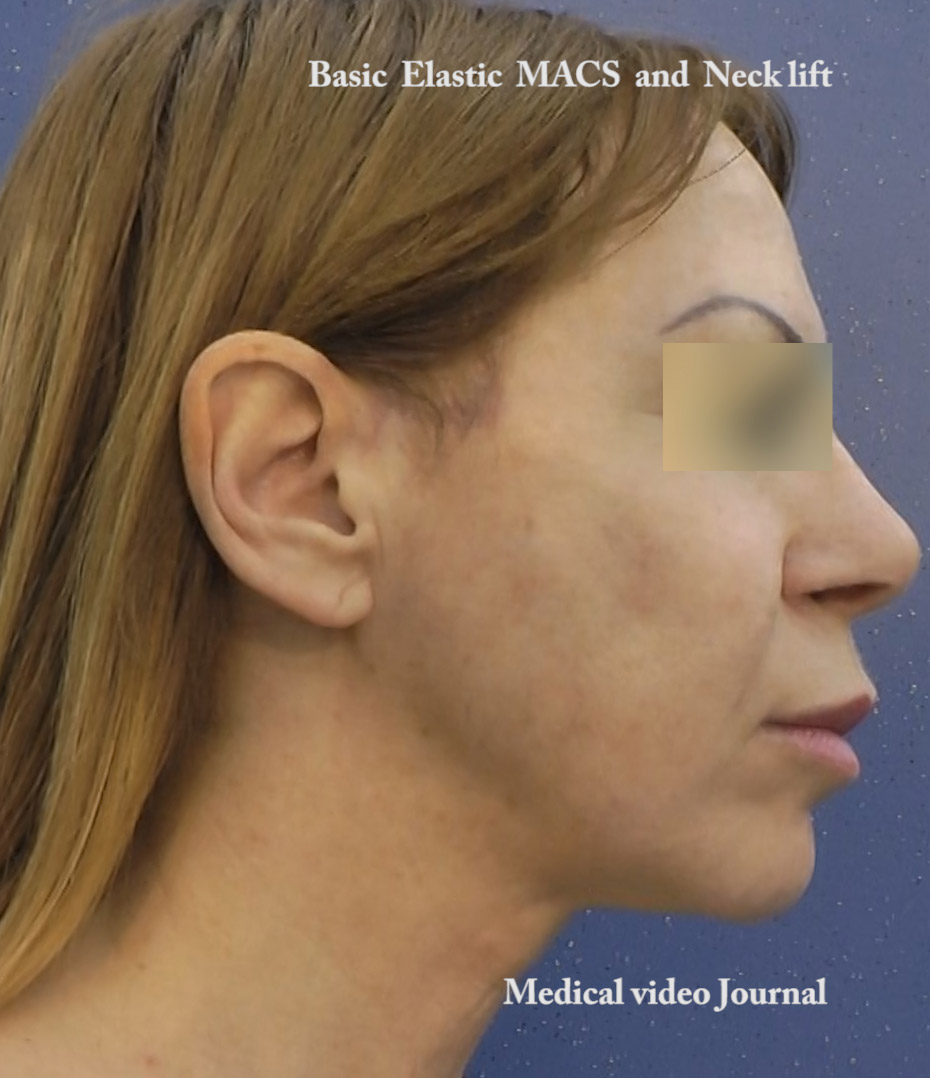 This video publication shows that dissection of the cheeks and neck is not necessary. What are the advantages of not performing dissection in these two regions?

Elastic MACS and Neck Lifting does not carry the risks of traditional lifting procedures, and can be performed even on heavy smokers. The concept underlying the elastic lifting procedures differs from that of traditional lifting procedures, in which ample dissection of the tissues of the cheeks and neck is carried out; instead of dissecting the tissues, new ligaments are implanted.
As the cheeks and neck are not dissected, the trophic damage caused by dissection is avoided. When the elastic thread and the two -tipped needle (Elasticum, Korpo) are used, the cheeks and neck no longer need to be dissected. Today, it is irrational to think that the face or neck can be rejuvenated by damaging their vascularization. The results of dissection are well known: loss of the subcutaneous tissue and of the natural coloring of the face. In elastic MACS and Neck lifting, the cheeks and neck are placed under traction and suspended by means of elastic threads, which are transformed into ligaments within a short time. Only in the temporal region, below the sideburn, do we carry out a few cm² of dissection, which enables the excess vertical skin to be removed. In comparison with traditional lifting procedures, the scars left by elastic MACS lifting are short, stopping at the tragus.
In the neck, there is no need to remove any skin; the excess skin and subcutaneous tissues cover the new cervicomandibular angle or are repositioned laterally, where they are used to correct hypotrophy of the neck region.
After Elastic MACS lifting, the skin has a more pleasing and more vascularized look; the vessels are no longer stretched by gravitational ptosis and the blood supply to the tissues is improved. The results of Elastic MACS and Neck lifting are extremely natural. With these lifting procedures, the patient does not become more beautiful, but has a more youthful look.
The absence of dissection of the cheeks and neck enables maintenance over time to be carried out easily. Any defects that arise are corrected by means of incisions of a few millimeters. Moreover, the two-tipped needle enables traction to be applied to the tissues exactly where it is needed.

When is basic MACS and Neck Lifting indicated?

MACS lifting is carried out if the skin at the sideburn can be folded. For what concerns the neck, simply running the elastic thread between the two fasciae of Loré is indicated in patients who do not have drooping neck skin. The patients seen in this video was a borderline case. If there is drooping skin, Elastic Neck Lifting is performed by means of safety pins. This recent procedure prevents the skin in the anterior neck region from sliding downwards and creating a skin fold. As it is minimally invasive, the basic MACS lift is also indicated in young patients who wish to counteract gravitational ptosis and retard aging.

What are the complications?

Immediately after the procedure, the patient may feel some pain, which can be alleviated by specific analgesics. For a few weeks, some skin alterations may remain; these can normally be masked if the hair is long. Particular attention should be paid to the temporal branch of the facial nerve. This nerve is very sensitive and simple traction of the malar region can cause monolateral drooping of the eyebrow. If this happens, we immediately restore symmetry by means of botulin and wait until the nerve resumes its function, as has always been the case. In some cases, we carry out elastic lifting of the eyebrows and neck regions, if this has been planned. This elastic lifting procedure requires no dissection either.

What is Adipolysis used for?

Just as Adipofilling enables us to increase tissue volumes where necessary, Adipolysis enables us to reduce tissue volumes (if they are not so large as to require liposuction). We apply this technique of Timedsurgery to reduce a slight double chin, excess volume of the cheeks, and malar pouches. Adipolysis, when performed at the same time as lifting, visibly improves our results. The advantages that Adipolysis has over liposuction are that it does not leave any marks, it causes little trauma, small areas can be treated, it does not cause fibrosis, and it can be repeated after two months, if necessary.  Adipolysis reduces the number of adipocytes without damaging the connective stroma. There is no need to apply an elastic bandage to the areas treated. Just one word of warning: the anesthetic solution must not be infiltrated into the areas where Adipolysis is to be performed; rather, barrier anesthesia is carried out.

How have these new techniques of elastic lifting without dissection been received by other aesthetic surgeons?

Those who have got to know them, both in Italy and abroad, have adopted them. In Korea, for example, all the most important clinics in Gangnam use the elastic thread. The surgeons who have adopted these procedures operate more and are able to meet the needs of their patients more effectively and more economically; it should be remembered that all the Elastic Plastic Surgery operations are ambulatory procedures. In Italy, a small percentage of surgeons have shown no interest in these techniques, perhaps because it is difficult to imagine lifting the face and neck without ample dissection.
The elastic thread has been designed by a surgeon with great experience of lifting procedures. It does not cut into the tissues and is transformed into a suspension thread. The same surgeon invented the two-tipped needle in 1983. However, after testing the needle with all the threads available at that time, he abandoned its use for several years; all the threads cut into the subcutaneous tissues! Hence, the invention of the elastic thread. This author has never been known to implant an absorbable thread. Moreover, the only non-absorbable thread he has implanted is the Elasticum thread. Indeed, as the son of a professor of Anatomy and Histology, he has profound knowledge of the subcutaneous tissue. He therefore realized that only a new suturing thread could be efficacious, and that a surgical technique that did not damage the trophism of the tissues would revolutionize the surgical lifting of the face, neck, breast and buttocks.

Elastic MACS lifting replaces the traditional lifting procedures, which require tissue dissection and manipulation of the SMAS. Its advantages are numerous: it does not cause trophic damage to the tissues, markedly rejuvenates the face, requires only a minimal skin incision (from the sideburn to the tragus), enables elastic neck lifting to be performed through the same incision (again without dissection), and is vertical and minimally invasive.
The isosceles triangles created by the elastic thread lift the facial volumes and straighten the vasculature, giving the skin a more pleasing appearance The results can easily be maintained over time by means of tiny incisions.
This ambulatory procedure is carried out under local anesthesia. Only two 10 ml vials of 2% Mepivacaine are enough for elastic MACS and Neck lifting. The content of one vial is applied pure to the access points, above the zygomatic arch and in the tunnels above the fascia of Loré. The content of the other vial is diluted to 40% and used to anesthetize the pathways of the threads in the cheeks and neck.
After MACS lifting, no bandages are needed; only an antibiotic ointment is applied to the skin incisions, and will be reapplied over the following days until the stitches are removed. If the patient has long hair, this will cover all the areas that have undergone lifting. During the same session, and through the same access, the recently designed Elastic Canthopexy procedure can be performed; this elongates the eyes and completes the rejuvenation of the face.
The elastic threads can also be used to correct the results of traditional lifting operations.
As elastic MACS lifting conserves the integrity of the circulation in the cheeks, it can also be performed in patients in the fourth decade of life (30-42 years), thereby preventing aging of the face.
Elastic MACS lifting constitutes the future of face-lifting in both young and elderly patients. (31/10/19)