34. With the elastic thread and two-tipped needle, is dissection still necessary in face- and neck-lifting procedures?

Lifting of the face and neck is being revolutionized by a new impalpable, non-absorbable, elastic surgical thread mounted on an atraumatic two-tipped needle; this thread does not cut into the tissues and is transformed into a ligament. In our study, which is aimed at achieving permanent rejuvenation of the patient’s appearance, we have replaced the ample dissections and manipulations of SMAS with the implantation of new suspensive ligaments. These exert traction and transpose tissue volumes exactly where necessary, close to the defect; skin dissection is either minimal or no longer needed. We are convinced that the patient’s appearance cannot really be rejuvenated by means of ample dissection of the skin of the face and neck. Tissue dissection creates vascular, trophic and nerve injury, thereby damaging a biological patrimony that we wish to maintain and improve. Traditional sutures cannot achieve stable results without ample dissection, as the suspension threads cut into the tissues within a very short time. Today, Elastic Plastic Surgery enables us to perform natural, stable, high-quality lifting in an ambulatory setting, through small incisions and without, or with minimal, dissection. Elastic Plastic Surgery needs to be learnt. The Medical Video Journal CRPUB.ORG devotes a section to the procedures that utilize the elastic suture, and to their evolution. In addition to surgeons, patients must also be informed about these ambulatory procedures; they must be willing to accept the complementary techniques that may accompany elastic lifting; they must also be prepared to put up with small skin alterations for a few weeks – though these can easily be masked by the hair or a scarf – in exchange for natural rejuvenation and a few days of convalescence.

We will now say something about skin dissection. Is dissection still necessary in face and neck lifting? Let’s take an example. This patient has already undergone a traditional procedure to lift her face and neck. Can her appearance be rejuvenated in an ambulatory procedure that restores the drooping tissues to their original position through the implantation of new suspensive ligaments? Can we correct these defects close to their origin and prevent the skin from stretching in the future? Can we avoid dissecting and removing the skin by implanting an elastic thread by means of an atraumatic, two-tipped needle? In a young patient, the answer is yes! No dissection; just new ligaments. The general rule applies: where there is no excess vertical skin, the tissues are neither dissected nor removed. In this patient, however, the skin at the sideburn can be folded between two fingers, which means that an elastic MACS lift is needed. This involves making an incision that runs round the lower part of the sideburn and stops at the tragus, and performing dissection that extends slightly beyond the zygomatic arch.
In Elastic Plastic Surgery, the neck never has to be dissected. Moreover, in elastic lifting of the eyebrows and periocular tissues, no dissection of the temporal region is required. The excess tissues are simply restored to their original position. In this patient, we can see the result of correction without dissection of the masseteric region, cheeks, neck or temporal region above the sideburn.

Lateral transposition of the anterior neck tissues enables us to correct the scrawny appearance of the neck, which is typical of the elderly. The neck now looks younger and more shapely. The appearance is perfectly natural. We will now examine elastic MACS lifting, which is the only Elastic Plastic Surgery procedure that involves limited dissection and removal of the skin. Let’s look at the elastic MACS lift in detail.

MACS lifting is carried out when there is an excess of vertical skin and the skin at the sideburns can be folded between two fingers. Dissection extends slightly beyond the zygomatic arch. Three elastic threads are anchored to the temporal fascia. These threads form triangles which lift the skin and subcutaneous tissues upwards. The excess skin is removed. All the skin that can be removed is removed. The subcutaneous tissues of the skin flap are sutured to the temporal fascia with an absorbable thread. This access can also be used to perform elastic neck lifting, traction of the platysma and elastic lifting of marionette wrinkles. The two-tipped Jano needle enables traction to be exerted without having to dissect the tissues. The elastic surgical thread does not cut into the tissues and is transformed into a “natural” ligament. The dissection you can see, which extends only slightly beyond the zygomatic arch, is the only dissection carried out during elastic lifting procedures.

The skin incisions range from 3 mm to 8 mm in length. Through the incision behind the ear lobe, a few square centimetres of dissection is carried out above the fascia of Loré. In the breast, one or two subcutaneous tunnels are created through the same small incision. Elastic MACS lifting puts an end to the dissection and skin removal required by traditional lifting techniques. In a few weeks, the tissues will adapt to the newly implanted ligaments, which makes the result stable over time. As there is no need to dissect the tissues, these procedures can be staggered over time. In the first ambulatory procedure, this patient underwent an elastic MACS lift plus an elastic Neck lift. In the second procedure, elastic lifting of the eyebrows and temporal regions was carried out. Four elastic threads (two on each side) were implanted; the second thread exerts traction between the eyebrows and the hairline, in order to redistribute the excess skin. Lifting carried out by means of Elastic Plastic Surgery is easy to maintain. Any drooping can easily be corrected by means of minor ambulatory intervention until the desired result is achieved. Elastic aesthetic surgery of the face and neck is vertical and repositions the tissues. The elastic thread that runs between the two fasciae of Loré enables the new cervico-mandibular angle to be covered with the excess skin. If necessary, superolateral repositioning of the skin can be completed by means of other neck procedures. Because there is no lateral dissection or skin excision, the results are perfectly natural. To correct any asymmetry, we can implant an extra thread … Often, however, this is not sufficient. If there is a volume deficit, we graft adipose and stromal cells both superficially and in depth. Adipofilling is normally carried out after the correction of drooping. The elastic threads correct drooping and restore the tissues to their original position. Adipofilling corrects the volume deficits.

Adipofilling can be used to fill sunken temporal fossae and the posterior regions of the face, and to correct the forehead, the upper eyelids, the lachrymal and orbital grooves, the lips, the nose and many other defects. Used on its own, Adipofilling can correct marked volume deficits of the face. 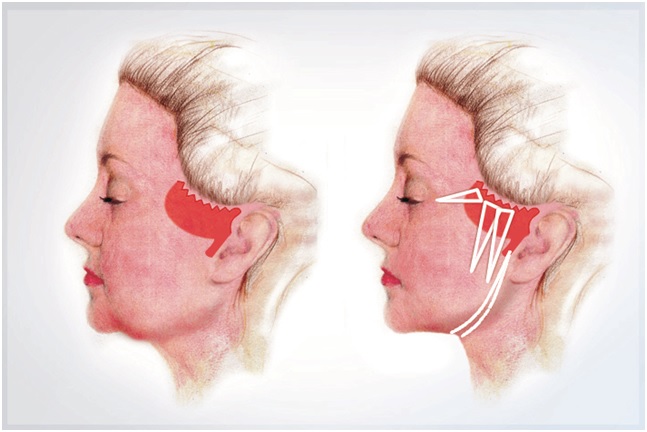 Elastic Plastic Surgery obviously revolutionizes the surgery of face and neck lifting. Where did you get this idea from?

When I was 19 years old, I used to assist my mother when she was performing face lifting. After 35 years of working in the operating theatre, I came to the conclusion that face-lifting needed to be completely modified. For what concerns suspension by means of threads, the idea is by no means new. My mother’s plastic surgery manuals already described procedures for the stable correction of facial nerve paralysis by means of strips of fascia lata. The concept of correction close to the defect was already known, and the results were highly satisfactory. The elastic thread has proved eminently able to replace these strips of biological material, and the 2-tipped needle has enabled traction and suspension to be carried out without

having to dissect the tissues. To all this, we have added the ability to transpose the tissues by exerting traction by means of subcutaneous sutures; these sutures are often arranged in a triangular fashion, and all the tissue encompassed by the triangle is repositioned. This repositioning achieves filling where it is necessary and gives the patient a natural and much younger appearance.

Is the width of the base of the equilateral triangle that is fixed to the temporal fascia or to the subcutaneous tissues in the latero-cervical region proportional to the volume of the tissues to be lifted or transposed?

Yes. In order to lift the cheeks, we anchor the elastic thread to the temporal fascia and create a triangle that is proportional in size to the volume to be lifted. In the neck, the elastic thread is anchored to the Lore’s fascia and to the the latero-cervical subcutaneous tissues; as the tissues are displaced sideways, the scrawny appearance of the neck is also corrected. The triangles are particularly efficacious and are always proportional in size to the volumes and the surfaces on which they act.

In these elastic lifting procedures, why is such importance attached to the posterior regions of the face and neck that are to be enhanced through the transposition of the tissues?

While the interior regions of the face and neck are obviously important, the posterior regions are just as important, as these contribute to a youthful appearance. Removing the lateral tissues of the cheek and neck often creates a “post-lifting” appearance, with the skin drawn tight and the face pointed; this is unnatural and makes the patient appear old.

In traditional lifting procedures, there is typically a scar that starts in front of the ear, runs around the lobe and up over the mastoid region, and ends up in the neck. Does this ever happen in elastic lifting?

No. We do not dissect the skin of the neck, nor do we remove it; we simply shift the tissues by means of a 5 mm incision. In this way, the result is clearly visible, but natural and “soft”. The tiny incisions are negligible. What is more is that this is an ambulatory procedure and the patient can go home after half an hour.

Aren’t there any problems with excess skin?

When neck lifting is carried out by implanting an elastic thread between the two fasciae of Loré, the excess skin of the cheeks is reduced, becoming negligible. As we have said, the skin and subcutaneous tissues of the neck are repositioned laterally.

From the conceptual standpoint, this is a highly innovative surgical procedure which enables us to correct all defects simply.

Aren’t there any problems with excess skin?

When neck lifting is carried out by implanting an elastic thread between the two fasciae of Loré, the excess skin of the cheeks is reduced, becoming negligible. As we have said, the skin and subcutaneous tissues of the neck are repositioned laterally.

From the conceptual standpoint, this is a highly innovative surgical procedure which enables us to correct all defects simply.

However we are studying procedures that rejuvenate where facelift do not act.