18. Elastic MACS and Neck lift in a patient with facial asymmetry

Elastic MACS and neck lifting is an extremely efficacious mini-invasive ambulatory procedure that can replace traditional lifting of the face and neck.
Before the procedure is started, a few millimetres of the sideburns are shaved off. The skin incision, which will loop around the sideburn and stop at the tragus, is marked out in this shaved area. Elastic neck lifting is also carried out through this small incision. Now, a line is drawn from the lower part of the wing of the nose to the point where the earlobe terminates. Next, the vertical suspension lines are drawn out. There are normally three of these; in this case, however, a fourth line has been drawn in order to correct the asymmetry of the mouth. Before drawing these lines, the operator lifts the facial volumes with the fingers until a pleasing effect is obtained. The excess skin that results from the raising of the facial volumes will be removed once the elastic threads have been implanted. 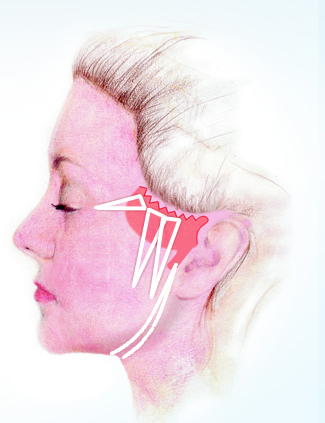 The first suspension thread will be implanted about 2 cm from the ear, and the second about 2 or 3 cm from the first. The third thread normally lifts the malar region or exerts traction on the orbicular muscle.
The pathway of the elastic thread that will lift the neck and restore the cervicomandibular angle will be drawn last. The operator pulls the skin of the neck upwards and carefully marks out the angle up to the two fasciae of Loré, which constitute the points of anchorage of the elastic thread in front of the ears. Once the angle has been marked out, a second line is drawn parallel to the first and about 1 cm from it; this represents the return pathway of the elastic thread. The line may be superior or, as in this case, inferior. If it is inferior, the thread will lift the lower part of the neck.

In addition, when blunt dissection is carried out in the temporal region under the sideburn, there are no anatomical structures that might constitute a surgical risk. If bleeding occurs while the thread is being anchored to the deep temporal fascia, it can be stopped by means of a few trans-facial stitches. For what concerns the frontal branch of the facial nerve, the operator must always bear in mind its pathway and its position immediately below the superficial fascia. The pathway of the nerve is represented by a straight line which begins from the lowest part of the ear lobe and runs past the lateral extremity of the eyebrow at a distance of ½ cm. The temporal branch is sensitive to the slightest injury, even that caused by a simple retractor. Nevertheless, no permanent paralysis of the nerve has ever been observed. The temporary drooping of the eyebrow is corrected by means of botulin toxin and elastic lifting of the eyebrows and of the temporal region. This last procedure completes the MACS and neck lift. But let us return to our operation.
The Jano needle continues to travel towards its point of entry. The elastic thread is firmly placed under tension. The two-tipped needle emerges from the wound and the elastic threads in the neck are knotted. Now the elastic suspensive thread in the more lateral portion of the cheek is knotted.
The vertical elastic MACS lift is completed by removing the excess skin. Using pincers of the Pitanguy type, the operator marks out the excess skin, which is then removed. All the excess skin must be removed. The elastic threads anchored to the deep temporal fascia support the facial volumes, and the wound is never under tension. The skin is normally removed in two stages. In the first stage, the anterior skin is removed. In the second stage, the operator decides which skin will be used to reconstruct the small preauricular flap. In this procedure, too, the scalpel is inclined in such a way as to preserve the subcutaneous tissue. The deep plane of the flap must be sutured to the deep temporal fascia by means of a 4-0 re-absorbable thread. Once the first part of the subcutaneous suture has been completed, the operator decides whether to utilise the flap that has just been cut to reconstruct the hairless flap close to the ear, or whether to maintain the flap drawn out at the beginning of the operation. In this patient, the previously drawn flap is maintained. This choice will depend on the excess of lateral skin, which may differ from one side of the face to the other
Particular care must be taken to ensure that the surgical access is sutured in an aesthetical manner. A reabsorbable intradermal suture completes the closure of the wound. All the stitches should preferably be reabsorbable in the medium term.
After half an hour, the patient can go home without any visible medication. At home, the patient will apply an antibiotic collagenase cream to the stitches and to the points of access of the two-tipped needle. The patient's hair will cover the small irregularities of the skin, which will disappear within a few weeks. The MACS and neck lift may sometimes be completed not only by means of elastic lifting of the eyebrows and the temporal region, but also by means of Adipofilling or the grafting of adipose and stromal cells.

How do you choose whether to perform an elastic MACS lift or elastic lifting of the cheeks without blunt dissection?

The presence of excess skin is evaluated by pinching the skin below the sideburns with the fingers. If there is no excess skin and the patient wants to confer a triangular shape to the face and to contrast drooping, elastic lifting of the cheeks is performed, without dissection of the skin, through small 4 mm incisions. If there is skin in excess, MACS lifting is performed. With regard to elastic lifting of the temporal region and the eyebrows, this procedure is almost always carried out without blunt dissection. Elastic neck lifting can be performed through a 1 cm incision behind the lobe of only one ear, which is therefore not visible, and minimal dissection.

We stopped performing traditional face- and neck-lifting procedures years ago. We now perform only the modern, more efficacious version of these: elastic MACS and neck lifting. An incision extending from the sideburn to the tragus is made. Dissection extends slightly beyond the zygomatic arch; the tissues of the cheeks and neck are not dissected. The rectangular dissection of the temporal region must not extend into the curved area where the frontal branch of the facial nerve lies close to the surface. This nerve is extremely sensitive and can be temporarily stunned even by the simple pressure of the spreader. This “torpor” of the frontal branch causes the eyebrow to droop, an effect that normally lasts a few weeks or, in rare cases, even six months. Drooping of the eyebrow is treated with botulin injections to lower the contralateral eyebrow, or with elastic lifting of both eyebrows. In MACS lifting, three elastic threads are implanted: two in the cheek and one in the malar region. In the malar region, the elastic thread is implanted very superficially and does not extend beyond the apex of the zygoma. After implanting the elastic thread, the operator exerts traction on the threads and judges whether suspension is efficacious and adequate; if it is not, the elastic thread is withdrawn and re-implanted. The threads implanted must not create introflections of the skin. By moving the Jano needle slightly up and down, the operator can ensure that the elastic threads are implanted at the same depth.
The elastic threads lift the tissues contained within the isosceles triangles. If the volumes to be suspended are small, the base of the triangle will be short. If the volumes are large, the base will be longer.
A fourth elastic thread can be implanted in order to elongate the eyes (elastic canthopexy). In elastic canthopexy, the Jano needle enters the temporal fascia from the dissected area and partially emerges from the skin after creating the base of the isosceles triangle in the temporal fascia. In the cheeks, the length of the short sides of the triangles is proportional to the area and the volume to be lifted.
Once the elastic threads in the cheeks and the malar region have been placed under tension and knotted, the excess skin is marked with the Pitanguy pincers and removed. All the excess skin must be removed. The edge of the skin cut is beveled, enabling the subcutaneous tissues of the flap to be fixed to the temporal fascia. Thus, in this procedure, the skin is also utilized to lift the cheeks vertically.
Elastic MACS and neck lifting replaces the traditional procedures that involve dissection of the skin and the SMAS. This minimally invasive procedure corrects drooping volumes and prevents their recurrence. As the elastic threads are transformed into ligaments, they prevent the skin from stretching. The fact that elastic MACS and neck lifting is minimally invasive means that it can be suitably applied in order to prevent aging of the face, even in patients in the fourth decade (30-40 years). The absence of dissection makes this lifting procedure particularly suitable in patients who are heavy smokers. (31/10/19)

Video publication (18) is up to date and shows the particularity of implanting a fourth thread in the left cheek to correct congenital asymmetry of the lip. Once the elastic threads have been transformed into ligaments, they maintain suspension over time and prevent the drooping caused by gravity. (30/07/15)