01. Elastic Face Lift of the cheeks without blunt dissection

Elastic lifting of the cheeks without blunt dissection of the skin is indicated in patients who wish to have facial volumes lifted without extensive incisions and without dissection of the tissues.
Lifting is carried out through small incisions of 4 or 5 mm after a centimetre of the sideburns has been shaved off. Once the incisions have been made, tweezers are used to reach the deep temporal fascia, which is the point of anchorage of the elastic thread. This elastic thread (Elasticum®, Korpo SRL) does not cut into the tissues and becomes an integrated suspensive ligament.
Lifting without blunt dissection is made possible by the two-tipped atraumatic needle (Jano needle®) designed, like the elastic thread itself, by the Capurro Research Group.
Following local anaesthesia of the areas marked out preoperatively on the skin, the tip of the Jano needle is inserted into the more lateral incision, travels through the deep subcutaneous tissues and emerges about 1 cm beyond the point previously marked. The needle must not be extracted completely. Once it has been pulled halfway out, the thread is pulled through. Depth marks on the shaft of the needle indicate how much of the tip remains in the tissues. When the posterior tip is 1 cm or ½ cm from the surface of the skin, the needle is rotated; the posterior tip now becomes anterior and travels in the direction of the medial incision. By moving the tip up and down, the operator checks that the pathway of the needle is not too superficial, as this would give rise to small irregularities of the skin. The needle emerges completely through the second incision. The traction effect at the angle of the jaw and the upper region of the neck is clearly visible.
The elastic thread is anchored to the deep temporal fascia.
The two-tipped needle emerges from the incision through which it entered. The thread is knotted, with slight elasticity being maintained. The extremity of the needle holder is used to push the knot deeper.
The second elastic thread is implanted.
The tip of the needle is inserted through the medial incision, travels through the deep subcutaneous tissues and emerges 1 cm beyond pre-established point. The thread is pulled through. Tweezers are used to prevent the thread from being extracted accidentally. The posterior tip of the needle now becomes anterior and travels towards the lateral incision, where it emerges.
The two-tipped needle now passes through the deep temporal fascia and emerges through the entry incision. The thread is knotted. A haemostatic material is used to ensure that the knots remain deep. In thin subjects, the small incisions are deeper than the deep temporal fascia, and the knots are buried within the temporal muscle.
The contralateral cheek is lifted in the same way.
The small incisions are made and the two-tipped needle is inserted. The anterior tip of the needle emerges 1 cm beyond the predetermined point. The needle is extracted up to the fifth depth mark on the shaft. The posterior tip now becomes anterior. The needle is moved up and down to check that the thread is not implanted too superficially, and then emerges through the medial incision. The traction on the tissues is evident.
The needle fixes the threat to the deep temporal fascia and then returns to its point of entry, where the thread is knotted. The second thread is now implanted. The posterior tip of the needle becomes anterior and travels towards the lateral incision, where the first thread was knotted. The needle emerges completely from the incision and then fixes the elastic thread to the deep temporal fascia, emerging from the entry incision, where the thread is knotted. 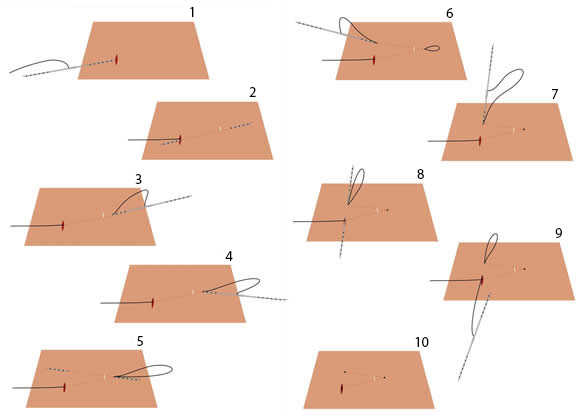 Elastic lifting of the cheeks without blunt dissection is less efficacious than an elastic MACS lift with dissection. Nevertheless, when the indications are correct, it offers a high degree of efficacy and, especially, is preparatory to more invasive face-lifting procedures.

Elastic face lift without dissection. The lifting effect on the malar, zygomatic and orbital regions and on the nasolabial fold is visible.

From 2004 to 2008, we carried out this procedure on 54 patients, 8% of whom subsequently underwent elastic MACS lifting with minimal dissection.

For which patients is elastic face-lifting of the cheeks without dissection indicated?

For young patients who do not want the skin incisions that MACS lifting requires, or who have little skin to remove. These patients normally want an undemanding procedure that can improve the shape of the face and prevent subsequent drooping of facial volumes.

Can the Elasticum® thread also be used to improve the facial symmetry?

If asymmetry is due to gravitational ptosis, it can. In the areas of the face where drooping is most marked, several thread can be implanted. If, however, the asymmetry is due to the lack of adipose tissue, we can correct this by means of Adipofilling®.

Can the knots in the deep temporal fascia ulcerate?

All knots can ulcerate through small incisions, especially if the thread is thick, for example an EP4 thread, or the knot is very superficial. When Elasticum® EP 3.5 is used, ulceration of the knot is rare. If it does occur, it does so after several months, when the thread has become a stable ligament, at which time the knot can be removed without any untoward effect. The operator should take care to create a convenient pocket for the knot; if deemed necessary, a fragment of haemostatic collagen can be inserted into the incision, as seen in the video, in order to ensure that the knot remains deep.

Is elastic lifting of the cheeks without blunt dissection preparatory to elastic MACS lifting?

Video publication (1) is up to date. Elastic lifting of the cheeks without blunt dissection has displayed long-lasting efficacy and a good preventive effect against drooping! The procedure has proved particularly effective in correcting the lower third of the face in patients whose skin cannot easily be pinched at the sideburn. If the skin is easily pinchable, we perform elastic MACS lifting, with the removal of the excess vertical skin.
Elastic lifting of the cheeks without blunt dissection has also proved particularly useful in perfecting the results of MACS lifting and traditional facelifts. From a technical point of view, in this procedure and in elastic MACS lifting, we pay particular attention to the width of the bases of the isosceles triangles, which must be proportional to the volumes to be lifted. For example, the bases of the triangles will be wider if the face is broad than if it is slim.
Elastic lifting of the cheeks without blunt dissection has recently been combined with elastic lifting for “puppet” wrinkles (31). (30/07/15)