Excess fat in the lower and medial portions of both buttocks is drawn off by means of liposuction. If necessary, liposuction can also be carried out in the lower and lateral portions. In this patient, it is not necessary. In some patients, liposuction is performed immediately before the elastic threads are implanted. An antibiotic ointment is applied to the incisions and to the sticking plasters.

For a few months, the patient will need to wear "push-up" panties, which lift the buttocks. This lifting effect ensures that the threads and the tissues are not under tension and reduces post-operative pain. For a few days after the procedure, the patient will have to sleep face down or on her side, and sit on her ischial bones. She must also refrain from riding a bicycle or doing physical exercises that stretch the gluteal muscles.
The slight skin alterations will disappear within a few months. The buttocks appear rejuvenated and have a more pleasing shape. The results of basic elastic gluteoplasty can be further improved by means of liposuction and Adipofilling, which enhance the shape and symmetry of the buttocks, or even by implanting further elastic threads. 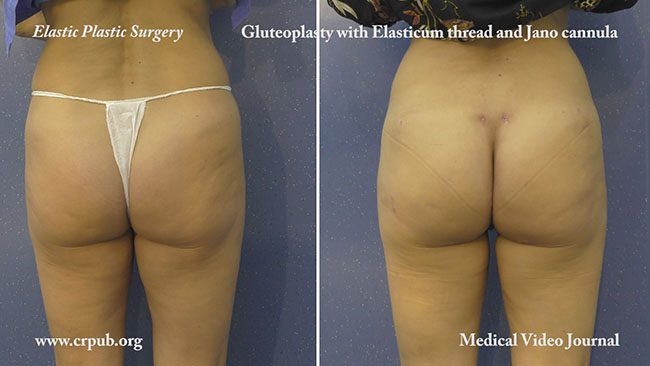 How does this new video publication differ from the previous 2013 publication Capurro S. (2013): Lifting the buttocks by means of the elastic thread and the two-tipped cannula through two 5 mm incisions. CRPUB Medical Video Journal. Elastic Plastic Surgery section.

First of all, only one entry incision is used in order to create both loops. The small incisions are made with an SM67 microsurgery scalpel, which is more precise than a number 11 blade.
Secondly, pre-tunnelling, which greatly facilitates the passage of the Jano cannula through the fibrous subcutaneous tissues of the buttock, had not yet been adopted. Thirdly, the elastic thread is soaked several times in dilute iodo-vinylpyrrolidone, and not in much more costly antibiotic solutions. Fourthly, the skin sutures are all absorbable. Finally, the new video publication clearly explains how to rotate the Jano cannula so as to change direction or to follow a curved pathway without shifting towards the surface. Indeed, as the cannula is rotated and the posterior tip becomes anterior, any shift towards the surface will result in a skin introflection, which must be avoided.

Was the elastic gluteoplasty in the video performed under local anesthesia?

Yes. Sometimes, we administer 10 drops of benzodiazepine to keep the patient calm. We carry out  anesthetist-assisted local anesthesia only on request.

Is there any risk of infection?

There are always risks in this region. You have to disinfect the operating field thoroughly with iodo-vinylpyrrolidone and to prescribe antibiotic therapy, starting on the evening before the procedure. In addition, a mupirocin-based antibiotic ointment must be applied to all the incisions for a few weeks.
Finally, the patient must scrupulously maintain local hygiene by using specific products. She should also take a few days off work; going to work the day after the procedure will increase the risk of infection.

What needs to be done if there is an infection?

Infection is very rare. However, if it does arise, you have to follow the protocols on soft tissue infections. This normally means using two antibiotics: one for Gram-positive and one for Gram-negative bacteria. Locally, you can inject dilute teicoplanin or dilute gentamicin plus clindamycin, both with a small amount of lidocaine. If the infection tends to recur, despite antibiotic treatment, it will be necessary to remove the threads through two small incisions.

How do you treat post-operative pain?

The pain is subjective. At the end of the procedure, an analgesic can be injected: 1 mL of tramadol + ketorolac tromethamine. If the pain persists the following day, another 1 mL dose can be injected. For the next three days, the patient takes sublingual ketorolac tromethamine. If localised pain is still felt after these three days, intradermal neural therapy is implemented with procaine exactly at the point where the pain is felt. However, this eventuality is rare. We add a small amount of epinephrine to the procaine, to eliminate the vagal effects of this anaesthetic.
In any case, after a few days, the pain of gluteoplasty is tolerable.