The lobular fat used in Adipofilling is preferably aspirated through a 4 mm diameter cannula. Local anesthesia uses a modified Klein solution: mepivacaine and epinephrine in a lactate Ringer solution. Liposuction is rapid. The lipoaspirate is washed with lactate Ringer in a flask equipped with a tap until the washing liquid becomes clear. Washing minimizes any residual anesthetic and epinephrine and any traces of blood. The washed lipoaspirate is poured into a beaker. A quantity of lactate Ringer equal to a third of the lipoaspirate is added. The presence of the Ringer solution enables the aspiration vortex created by the Adipopimer (Korpo srl, Italy) to fragment the lobular fat without damaging the biological material.
The lobules of aspirated fat.
The Adipopimer is immersed into the washed lipoaspirate and then switched on. The aspiration vortex fragments the lobules. In a few seconds, the lobules are reduced to tiny fragments of adipose tissue, which take root more easily.
About a third of this fragmented lipoaspirate is poured into the second beaker. On the glass wall of the beaker, we can see fragments of the lipoaspirated lobules which will be injected into the subcutaneous tissues in order to carry out volumetric Adipofilling.
This already fragmented material in the second beaker is now fragmented further by means of the Adipopimer, in order to create a suspension of living adipose and stromal cells, which has a mainly regenerative function.
On tilting the beaker, a uniform transparent layer of single cells appears. 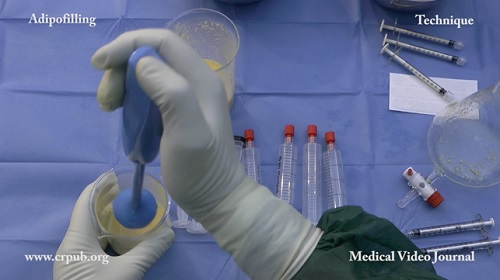 Two suspensions have been prepared from the lobular fat: one containing fragments of adipose tissue; the other containing single cells. The operator now prepares four 20 ml syringes equipped with stoppers. The two syringes into which the suspension of single cells is to be poured are marked with a steri-strip. The volumetric suspension will be poured into the other two syringes, which are unmarked.
All four syringes are centrifuged at 400 RPM for 4 minutes (17 RCF). After centrifugation, the Ringer solution remains at the bottom of the syringe. Immediately above this, we see the layer of stromal cells, and then the heavier adipocytes; the lighter adipocytes are visible above these. Finally, at the top, a thin layer of oil forms; this shows that the procedure has not damaged the adipocytes.
With the aid of a finger, the operator eliminates the lactate Ringer solution, taking care not to allow the stromal cells to escape; these cells include the stem cells.
The suspension of living adipose and stromal cells is expelled into a beaker by pressing the plunger of the syringe. The thin layer of oil, about ½ ml, remains in the syringe. The operator then shakes the beaker to redistribute the stromal cells throughout the suspension; when the two components of the adipose tissue are both uniformly distributed in the suspension, greater efficacy is achieved. The cell suspension is now transferred to a 20 mL syringe. By means of a connecting tube, 1 mL Luer Lock syringes are filled. The suspension of single cells can be injected into the subcutaneous tissues of the most delicate areas or into the dermis, and exerts a powerful, exclusively regenerative action. Alternatively, it can be added to the volumetric suspension of tiny fragments of adipose tissue, in order to enhance rooting.
The lactate Ringer solution is now removed from the two syringes containing the volumetric suspension. The suspension is shaken in the beaker and then poured into a 20 mL syringe. From here, it is transferred to small syringes.
Some results.
A rare case of bilateral Parry-Romberg syndrome after three sessions of Adipofilling.
Hypertrophy of the inferior third of the face and a receding forehead: corrected by means of two Adipofilling sessions.
Hypertrophy of the cheeks after one session of Adipofilling.
Hypertrophy of the face after two sessions of Adipofilling.
The fact that the fragments of the fat lobules are extremely small means that the volumetric solution can be injected through a thin cannula into the subcutaneous tissues of the most delicate areas, such as the palpebral region. This region can be filled, if it is indented, or its surface can be regenerated by grafting a thin layer of fine fragments of adipose tissue.
Adipofilling can correct noses that have undergone several surgical procedures.
It can enhance the volume of the breasts or make them symmetrical.
Adipofilling rejuvenates the backs of aged hands.
In three sessions, Adipofilling has proved able to eliminate the pain caused by chronic radiodermatitis with exposure of three vertebrae.
Adipofilling with living adipose and stromal cells minimizes stretchmarks. The result one year after injection.
Adipofilling is frequently used in combination with Elastic Plastic Surgery. An elastic thread is used to conize the breast, and the apex of the mammary cone is filled with fragmented adipose tissue.
Elastic lifting of the eyebrows and the temporal region is carried out without skin dissection, through an incision of a few millimeters at the hairline.  Once elastic lifting of the eyebrows has been completed, the wrinkles of the forehead are reduced by injecting the regenerative cell suspension into the dermis with a 25 G needle.
The suspension of living adipose and stromal cells does not function as a filler; rather, it exerts a regenerative effect on the tissues. This effect is directly proportional to the amount of suspension injected. This can be seen on observing the photographs and videos; where a larger amount is injected, the wrinkles disappear.
The volumetric suspension is now injected into the temporal fossae and the forehead, in order to make it more convex. Injection is carried out through a 21 G cannula.
Although the forehead and the temporal regions are of great esthetic importance, they are often neglected. Adipofilling can reduce or eliminate wrinkles, make the forehead convex, and correct the irregularities of the frontal bones that are manifested over the years as the skin becomes thinner. Filling the temporal fossae eliminates the emaciated appearance that is typical of the elderly face; it also enhances the shape of the eyes and tends to exert a lifting effect on the cheeks and neck. This lifting effect is more marked if Adipofilling is also performed in the more lateral regions of the face.

The regenerative suspension of living adipose and stromal cells is injected intradermally into neck wrinkles and even into large areas where the skin is aged or damaged by exposure to the sun. Intradermal cellular Adipofilling can be used to rejuvenate: the glabella, the lips and the areas around the mouth; and, on the body, stretchmarks and deteriorated skin on the arms. All facial and bodily scars can be improved by means of intradermal cellular Adipofilling. In extensive areas, barrier anesthesia can be carried out with an anesthetic solution.
After 20 days, the result of intradermal regenerative Adipofilling of the neck is clearly visible. This result is stable over time.
Our innovative research has enabled wrinkles to be eliminated and aged skin to be made youthful once again.

Can the two main suspensions, which have different granulometry, be obtained by activating the Adipopimer for a set number of seconds?

To obtain the volumetric suspension, the Adipopimer is activated for 4 seconds; for the regenerative suspension, it is activated for 15 seconds. However, the granulometry obtained must always be checked by tilting the beaker, because the consistency and volume of the adipose lobules may vary from one patient to another. In addition, quantities of more than 100 mL of lipoaspirate may require a longer duration of fragmentation.

Are there any limits to the rejuvenating effect on the skin and to the elimination of wrinkles?

This technique is new and its limits are not yet clear. What is clear, though, is that the living adipose and stromal cells injected into the dermis exert the most powerful regenerative action known to date.

What advantages does Adipofilling have over the techniques of nanofat, microfat, etc?

Lipoaspiration is quicker; fragmentation of the biological material is atraumatic and rapid; the granulometry (tiny fragments of adipose tissue or a suspension of single cells) can be selected; the vitality of the adipocytes and stromal cells is maintained; and large quantities of lipoaspirate can be processed in a few seconds.
Moreover, it should be borne in mind that small-caliber cannulas damage the adipocytes; indeed, everything (except water) that touches the adipocytes will damage them.

So, doesn't that mean that the Adipopimer damages the adipocytes?

No. The adipocytes and stromal cells are separated by means of the aspiration vortex created by the Adipopimer. A volume of one third of lactate Ringer solution must be added to the washed lipoaspirate; this enables the vortex to separate the adipose tissue first into fragments, and then, after more prolonged fragmentation, into single cells.
Following centrifugation at 400 RPM (17RCF G), the cell suspension is topped by an extremely thin layer of supernatant oil, which demonstrates that the adipocytes remain intact.
Indeed, a smear of the cell suspension will show intact adipocytes. I advise anyone who performs micro-fat and nano-fat techniques to carry out this extremely simple examination. I believe it's useful to examine under the microscope what we inject. I think Tonnard did this with nanofat obtained from multiple filtration. Nanofat does not contain living adipocytes. Personally, I would never inject it. Injecting a pulp that does not contain adipocytes will not have any significant or lasting effect. Living adipocytes are essential, as they produced numerous substances that favor tissue regeneration.

What can you say about the use of an open system; is there any risk of infection?

We've always wondered why, in the hundreds of Adipofilling procedures that we have performed in the Department of Plastic and Reconstructive Surgery and the Burns Unit of San Martino regional hospital in Genoa, we have never had a single case of infection. We now know the answer; the adipocytes secrete potent antimicrobial substances, including the peptide cathelicidin.

We've seen the extraordinary result of intradermal Adipofilling. After only 20 days, the wrinkles had disappeared and a large area of elastosis and scarring had improved. It looks like a different neck…

Intradermal Adipofilling with living cells is extremely efficacious. We now propose to study the changes that occur in skin that is rejuvenated by means of this technique. The adipose and stromal cells injected into the dermis do not exert a volumetric effect; their effect is regenerative. In order to eliminate wrinkles, it is necessary to inject a quantity of cell suspension that extends well beyond the wrinkle itself.
Regenerative Adipofilling is a very important means of rejuvenating our patients' skin, and opens up a new era. Anyone who understands this can achieve previously unattainable results.

Yes. There's a whole world yet to discover.