06. Adipofilling®: a simple technique for the permanent esthetic correction of noses that have undergone surgery

Noses that have undergone multiple surgery or been traumatized can often be corrected by means of Adipofilling, which involves grafting living adipose and stromal cells prepared with the Adipopimer. Once the preoperative design has been carefully drawn out, the cell suspension is injected into the nasal pyramid, where it corrects the volume deficits; it also exerts a potent trophic action on the scar tissues of the nose. In some cases, as in this patient, it may be necessary to remove a scar or a bony protuberance of the gibbus. In other cases, cartilage or bone grafts may be required.
Adipofilling of the nose is an ambulatory procedure carried out under local anesthesia. Care must be taken when the concentrated cell suspension is injected, especially if needles are used instead of cannulas. Before injecting the suspension, the operator must aspirate; for greater safety, the assistant can compress the angular vein and artery with the fingers.
After being injected, the adipose and stromal cells sometimes leak out from the needle puncture. Applying slight compression to the injection site for a few seconds prevents leakage of the biological material and allows the cells to settle into the recesses of the subcutaneous tissues.
In the Adipofilling procedure, liposuction is carried out under local anesthesia with a modified Klein solution. A vial of 2% mepivacaine, supplemented with 1 mg of epinephrine, in 250 ml of lactate Ringer solution is used. The aspiration cannulas have a diameter of 4 mm or 3 mm. Aspiration through a large-caliber cannula maintains the integrity of the aspirated tissue. The circular cross-section of the cannula means that the maximum volume is contained within the minimum surface area. Using a large-caliber cannula minimizes the damage caused by friction.
If small quantities are to be injected, the lobular lipoaspirate is washed with lactate Ringer solution in the aspiration syringe, in order to eliminate blood, local anesthetic and epinephrine; blood is particularly irritating, owing to the presence of iron. Washing is continued until the liquid becomes clear. In Adipofilling procedures that require large quantities of adipose and stromal cells, washing is carried out in a flask equipped with a tap. Using a flask enables large amounts of lipoaspirate to be washed rapidly and economically, with a few 500 mL bottles of Ringer solution.
The fat lobules are clearly visible in the syringe.
The washed lipoaspirate is poured into a beaker, where it will be fragmented with the Adipopimer. To achieve thorough fragmentation, a volume of about 25% of lactate Ringer solution is added to the lipoaspirate.
The Adipopimer is an economical disposable device.
Once the protection has been removed from the thin ceramic blade, the bell-end of the device is immersed in the washed lipoaspirate, and the lobules of the adipose tissue are fragmented. Small clumps of cells and single cells are separated atraumatically by the aspiration vortex created by the Adipopimer. Fragmentation takes only a few seconds. 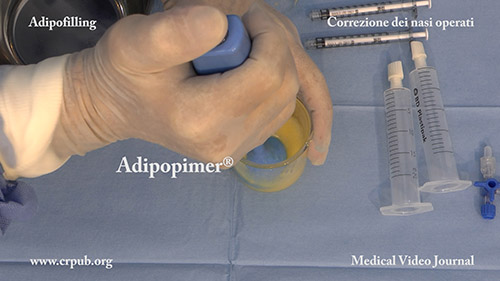 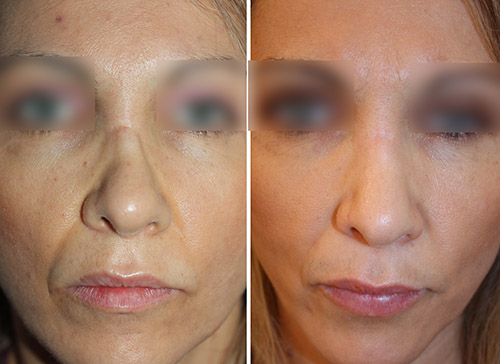 What is the granulometry of the suspension used in Adipofilling of the nose?

How can you see the granulometry of the cellular suspension?

After fragmentation, you only need to incline the beaker and see what remains on the glass. Small cell clumps can be clearly seen. If the granulometry needs to be reduced, the suspension can be fragmented further. In this case, a uniform layer made up mainly of single cells will remain on the surface of the glass when the beaker is inclined.

When are single cells used?

They are used for more delicate corrections and for the intradermal injection of wrinkles, areas of roughness of the face, stretch marks, etc.  Single cells suspension improves the engraftment of the volumetric suspension.

When you wash and handle the fat, why do you use glassware?

Because glass is safe. Remember that fat tends to wear away plastic materials, leading to the release of substances, which I prefer to avoid as far as possible.

How long after esthetic rhinoplasty can Adipofilling of the nose be performed?

After one or two years, noses that have undergone rhinoplasty normally become skeletonized, taking on a typical artificial appearance. Adipofilling eliminates this artificial look and corrects the defects that are manifested after this period of time.