Adipofilling easily corrects severe facial atrophy. Adipopimer mechanical fragmentation transforms lobular fat obtained from liposuction into a suspension of adipose and stromal cells that can be injected as a permanent living filler.
Reducing the size of the material obtained from liposuction allows us to inject greater volumes and distribute cells in several layers of the subcutaneous tissue, without risk.
Our prime objective is to avoid collateral effects, hardening, granulomas, necrosis and calcifications. This objective is particularly important when operating on the face and breasts. 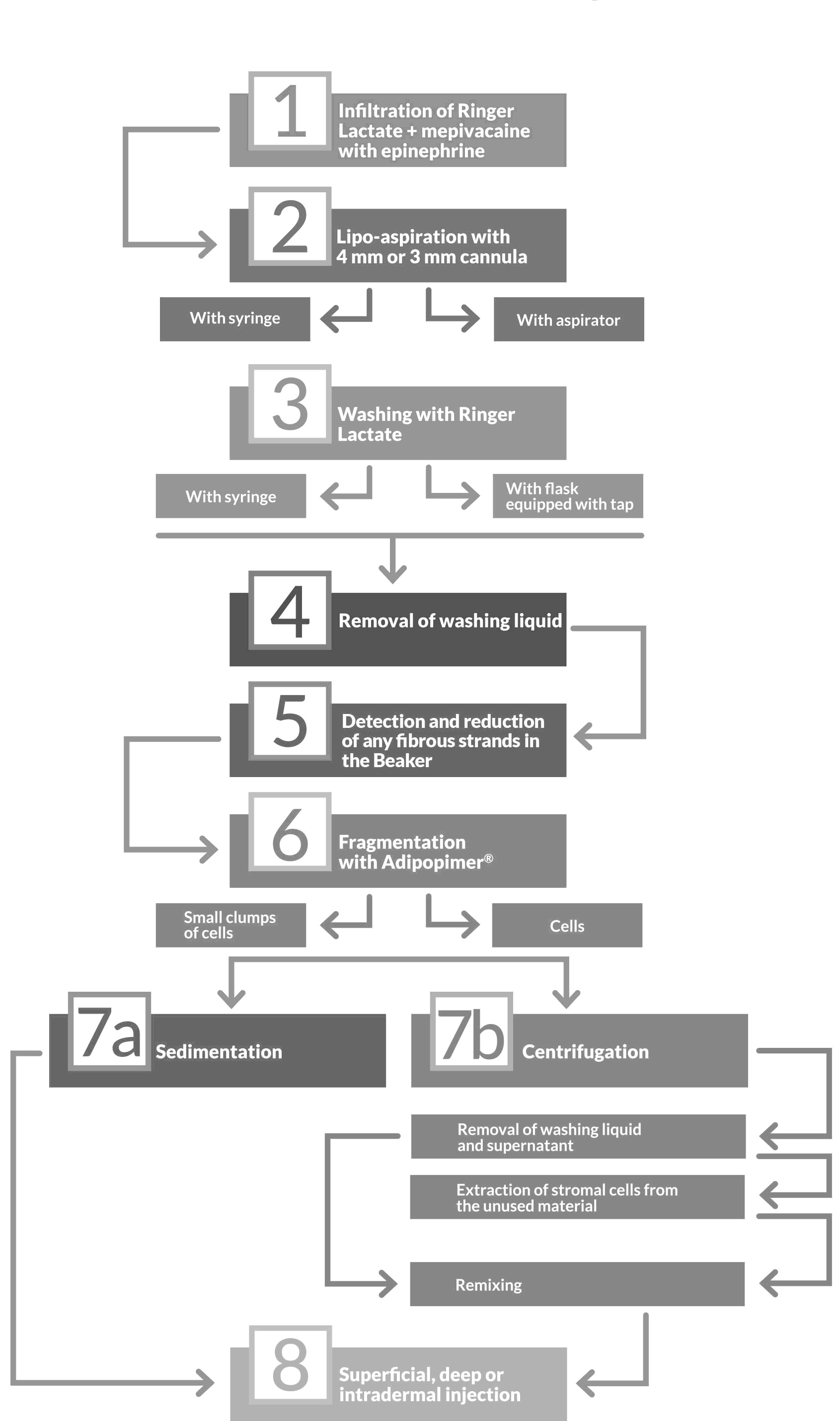 As always in Adipofilling, we use an anesthetic composed of modified Klain solution containing 500 ml of Ringer’s lactate, 2 vials of 2% mepivacaine and ½ milligram of epinephrine.
Liposuction is performed by means of a 4-mm diameter cannula. Thinner cannulas damage the aspirated tissue to a greater extent.
The lobular fat extracted by means of liposuction is washed in an Erlenmeyer flask equipped with a tap. The fat lobules are washed with Ringer lactate solution. Washing continues until the solution coming out of the tap is clear and transparent.
The lobules are then placed in a beaker and fragmented mechanically with the Adipopimer (Korpo srl - Genova Italia). The Adipopimer is an economical, sterile, disposable device which exploits the principles of granulometry to obtain from the lobular lipo-aspirate a suspension of single cells or small clumps of cells that can be injected like a filler. Fragmentation takes only a few seconds. By inclining the beaker, the operator can check the degree of granulation of the suspension, from small cell clumps to single cells.
The lipo-aspirate has been placed in two containers so that the differences between the lobular material and the fragmented material can be seen macroscopically.
At the microscopic level, this smear of the suspension reveals the integrity of the adipocytes. We believe that adipose tissue should be grafted in the form of stromal and adipose cells.
The granulometry of the material fragmented with the Adipopimer is designed to be no less than 120 microns, which is the maximum size of an adipose cell in a non-obese living patient.
The lobules are then placed in a beaker and fragmented mechanically with the Adipopimer
Anesthesia is only performed at the points of entry of the needle.
After fragmentation, the suspension is poured into 2.5 ml syringes and is left to settle for a few minutes in order to eliminate any residual washing solution. The cellular suspension is injected as a filler. Using an 18 G needle enables the cells to be implanted at several levels.
The procedure does not include centrifugation. We only centrifuge the cellular suspension when we want to select the heaviest stromal and adipose cells to perform small specific corrections. In this case, the centrifuge is set to the minimum speed (300 RPM) and activated for approximately 5 minutes, so as not to damage the adipocytes.
It is interesting to observe the layers of distribution following mechanical fragmentation: from bottom to top, we see the thin stromal layer containing small quantities of stem cells, the heaviest adipocytes, cellular fragments and an extremely thin layer of oil. This signifies that fragmentation causes minimal cellular damage. The layer of oil is much thicker when the fat is aspirated through a 2-mm diameter cannula and centrifuged at high velocity (3000 revolutions for 3 minutes). During this process, the presence of a thick layer of oil indicates that numerous adipose cells have been ruptured.
The adipose and stromal cells implanted may persist to varying degrees, but the result is always clearly visible. The first Adipofilling procedure, however, yields a lesser result than subsequent procedures for a number of reasons. In this case of severe bilateral Parry-Romberg fat atrophy, which appeared at the age of 8 years, the most important factor is the small subcutaneous space in which the implanted cells can suitably be contained and nourishing.
In the second operation, the subcutaneous space able to receive the cellular suspension is greater, allowing a larger number of adipose cells to be implanted and nourished.
After four months, a second Adipofilling procedure may be performed.
After four months, the outcome obtained in terms of the dimensional characteristics of the cellular suspension from Adipofilling can be considered a realistic and permanent result. This means that the increase in volume is due to cellular rooting and not to inflammatory fibrous phenomena or necrosis and lobular calcification.
Six months after the second operation, correction seems quite satisfactory.

However, the simplicity of Adipofilling, the absence of complications and the patient’s desire to have a plumper face prompt us to carry out a third and final procedure.
The areas of the face where volume enhancement is to be performed are marked out. The cell suspension is injected into the subcutaneous tissue through an 18 G needle mounted on a 1 mL syringe. With thinner needles or cannulas, for example 21 G, we would have had to use a 1 mL Luer Lock syringe. Local anesthesia is carried out only at the entry points of the needle. Injection is superficial, as in the case of “volumetric revitalization”. A few minutes after being injected, the single cells or small clumps of cells become nested in the interstitial spaces in the fundamental substance, and the skin becomes smooth again.
In this third procedure, the receiving tissues are thicker and have greater trophism, owing to the biological action of the previous Adipofilling procedures. In these cases, over-correction is always carried out.
After more than five years, the adipose and stromal cells are still extremely well rooted and the result is perfectly stable. Thanks to its operational versatility and the simplicity and cheapness of the procedure, Adipofilling can today be considered the gold standard for the transfer of adipose tissue. 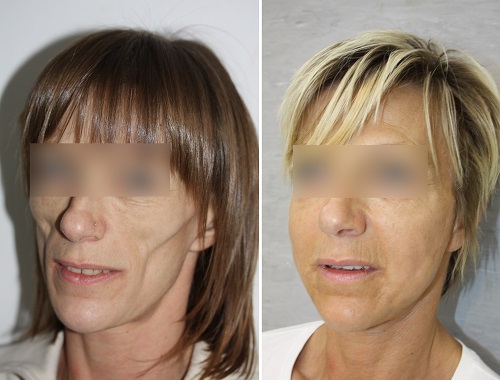 This patient seems to be very thin. Was it difficult to obtain a sufficient quantity of fat to perform Adipofilling®?

Even if the patient is very thin, it is always possible to aspirate 100 mL of fat from one or both trochanters; this will become 60 mL of cell suspension, which is sufficient for these facial corrections.

Which regions is it best to take the fat from?

All regions are suitable, but in some the fat needs to be evaluated; for example, the knees are not always suitable because the adipose tissue may be too fibrous.

Does hardening ever occur?

After injecting the suspension, we normally massage the area gently to distribute the cells. Some areas may display hardening for a few hours, but the cells nevertheless find their proper location and the tissues become soft again.

Is anesthesia of the receiving area carried out?

Only at the entry points of the needle or micro-cannula.

How is the micro-cannula inserted?

The skin is pierced with an 18 G needle, and the cannula is inserted through this aperture.

How is the Adipofilling® implanted?

As Adipofilling® is a cell suspension, it can be uniformly distributed as if it were a “volumetric revitalization” agent. We avoid multiple insertions of the needle or cannula as this causes needless fibrosis, the effects of which nevertheless disappear in a relatively short time.

Which is the longest phase of this procedure?

Washing the lipoaspirate. First of all, I advise using mepivacaine as an anesthetic, because lidocaine prevents glucose from penetrating into the adipose cell. Next, I advise using an efficacious amount of epinephrine and waiting for a sufficiently long time before carrying out liposuction. There should preferably be no blood in the lipoaspirate. These small quantities of fat can be washed with lactate Ringer solution in the same syringe used for aspiration.
Fragmentation with the Adipopimer® (Korpo, Italy) takes only a few seconds.

Is the Adipopimer® that we see the market version?

Yes, it is the most recent version, which is the best suited to creating the ideal suspension. Correction of this facial atrophy was achieved with the prototypes that enables us to produce today’s market version.

Can the suspension be frozen?

Yes, but we prefer to use it fresh.

Is the result permanent?

By performing the technique correctly, we have always obtained good results, without complications. The volume enhancement that we seek to achieve is biological; in other words, it involves living cells. We are not interested in achieving increased volume due to surgical artifacts of traumatic fibrosis or to the insertion of adipose lobules containing apoptotic cells.
The first Adipofilling® procedure may seem disappointing, but it plays an important role in preparing for the subsequent cell graft.

Centrifuged Adipofilling offers the extraordinary possibility of obtaining stromal cells in a few minutes. When are these used?

The stromal cells in the fragmented material that is not injected are separated from the adipocytes by means of centrifugation at 300 RPM for about 5 minutes. These cells are remixed with the cell suspension that is to be injected. They are chiefly used for regenerative purposes in several fields, for example in the treatment of radio-dermitis or, by means of intradermal injections, to improve stretch marks on the skin.

Do you realize that Adipofilling and Adipopimer will revolutionize the fat transfer? 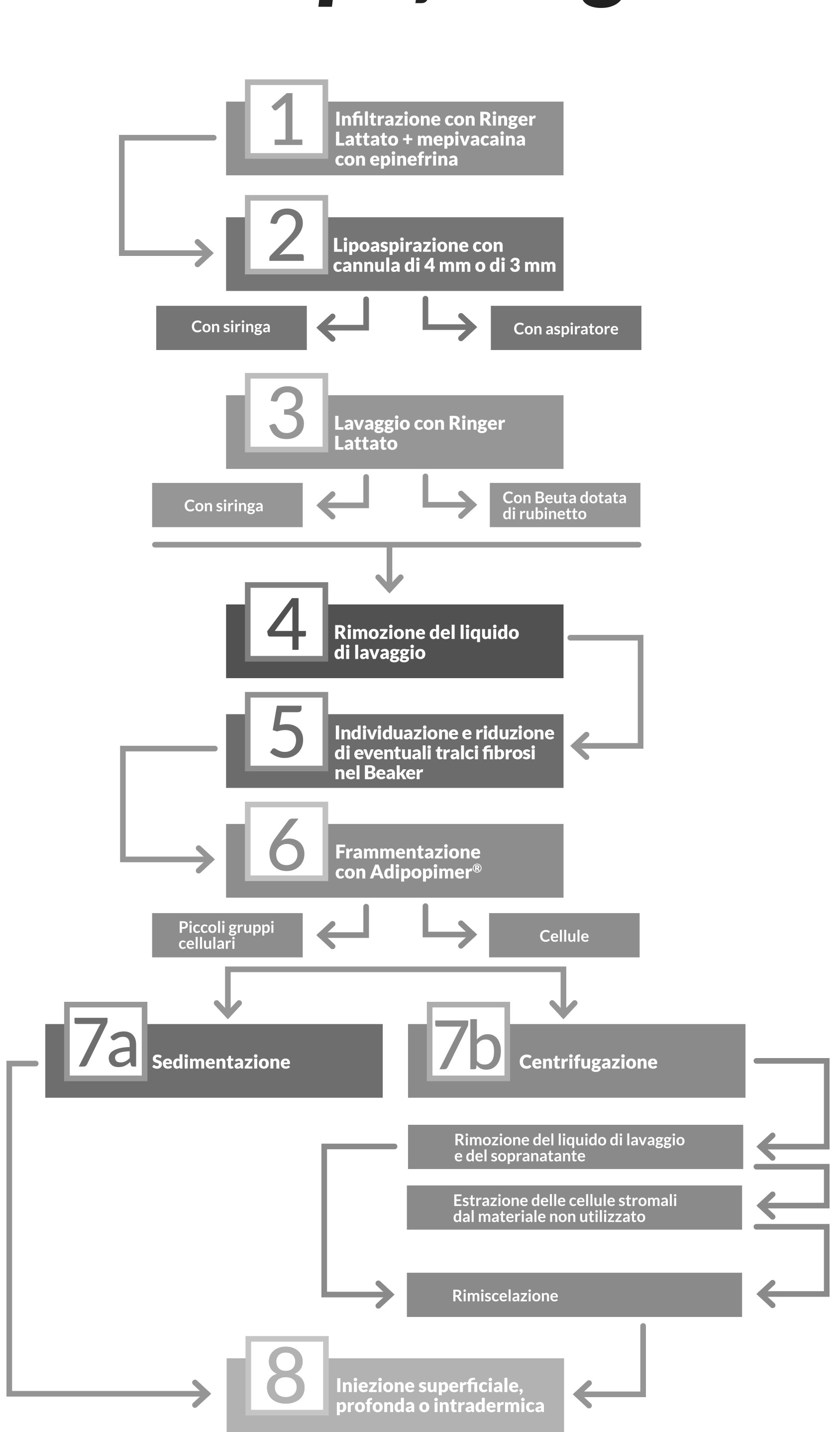