The hands can be rejuvenated by eliminating any patches on the skin, reducing the caliber of the veins and performing Adipofilling in order to restore the volume of the subcutaneous tissues and enhance the quality of the skin.
As always, the area from which the fat is to be taken is anesthetized with mepivacaine.
To a 10 mL vial of 2% mepivacaine, ½ mg of epinephrine is added. The vial is then emptied into a beaker containing 150 ml of Ringer solution or physiological solution. The anesthetic solution is injected through a 5 mm incision. First, we use a very thin cannula, and then a 2 mm cannula. After injecting the local anesthetic, we wait 10 minutes. Liposuction is carried out by means of a 60 mL syringe, a catheter and a 4 mm diameter cannula. We normally aspirate a larger amount of fat than that which is to be injected. The volumetric cellular suspension that is not injected can be conserved at temperatures of between -20°C and -31°C and utilized to correct or enhance the same area, or another area, in the following months.
On completion of liposuction, the small incision is sutured. The aspirated lobular fat is placed in a flask equipped with a tap and washed with Ringer solution or physiological solution until the washing liquid becomes clear and transparent. The washed lobular fat is then placed in a beaker, together with a one-third volume of Ringer solution or physiological solution. We now aspirate 10 ml of a 5% glucose solution, to which we add 30 IU of rapid insulin. The solution with the insulin is added to the fragmentation liquid.
The cap is removed from the Adipopimer and the bell-end of the device is immersed into the washed lipoaspirate. The aspiration vortex created by the Adipopimer fragments the lobules in a few seconds, producing the suspension to be used in volumetric Adipofilling. A small amount of this suspension of lobular fragments is placed in another beaker. The Adipopimer transforms this material into a suspension of living adipose and stromal cells. When the beaker is inclined, a uniform layer of cells appears on the glass. This cellular suspension is then added to the volumetric suspension. The material is placed in 20 mL syringes equipped with caps. The syringes are then placed vertically inside a beaker and left to stand, so that the lobular fragments and the single cells can separate from the fragmentation liquid by means of sedimentation.
In the meantime, we use a dermographic pen to mark the points of access of the cannula. An anesthetic solution containing epinephrine is injected at these points.
We now carry out phlebotherapy of the dilated veins of the hand. We add 1/2 ml of 2% lidocaine to a 4 mL vial of 6% sodium salicylate in a buffered hydroglycerin vehicle. The solution is injected by means of a 2.5 mL syringe and a 25G needle. We do not want to close the dilated veins; our aim is to reduce the caliber and to strengthen the walls of the visible veins, so that they will not dilate excessively when warm.
The suspensions created by means of the Adipopimer are now injected through a thin 21 G cannula, 7 cm in length. This restores the volume that is characteristic of a young hand, and which has been lost over the years.
The glucose solution containing rapid insulin, which has been added to the fragmentation liquid, facilitates the uptake of glucose by the adipocytes, stimulates the accumulation of fat, reduces lipolysis and increases the absorption of amino acids. The addition of insulin can be regarded as a sort of anabolic "feeding", which acts both during the initial phases of grafting and over the following months, when the Adipofilling suspension is conserved at a low temperature: between -20°C and -31°C.
The lobular fragments, together with the cellular suspension, are injected under the skin of the backs of the hands. If necessary, the Adipofilling suspension can also be injected into the fingers. If there are any skin scars, the operator sets aside a few milliliters of cellular suspension, which is then injected into the thickness of the dermis of the scar. When injected into the dermis, the Adipofilling suspension, which is made up of single living adipose and stromal cells, does not have any volumetric effect, but exerts a powerful regenerative action in the skin. This regenerative capability is derived from the numerous substances secreted by the adipocytes. The isolated adipocytes are not inhibited by contact with the other cells and are freer to secrete their anabolizing hormones. For this reason, we also add a small amount of cellular suspension to the volumetric suspension. In our experience, combining the two suspensions has enabled us to markedly improve the rooting of the fat injected.
Thanks to its anti-inflammatory and trophic action, the cellular suspension can also be used to treat painful pathologies of the hands and fingers. In quantities less than ½ ml, it can also be injected into the metacarpophalangeal joints and the joints of the fingers. The main indications for this infiltration therapy are articular pathologies (arthrosis, non-infectious arthritis, chondropathies) and diseases of the peri-articular structures (borsitis, capsulitis, fasciitis, enthesitis, tendinitis, etc).
In the hundreds of Adipofilling procedures carried out at San Martino Hospital in Genoa, we have never observed any infections; this is because of the antibacterial substances contained in the adipose cells, the qualities of which never cease to amaze.
In this patient, we have injected 12 mL into the back of the right hand.
We now perform phlebotherapy of the veins on the back of the left hand. When the weather gets hotter, these veins will no longer dilate, and the hand will have a more youthful look. In some patients, phlebotherapy is also carried out in the veins of the forearm.
We now perform Adipofilling of the left hand.
Adipofilling transforms an aged hand into a young hand. This simple ambulatory procedure permanently corrects one of the most evident and least manageable signs of aging. 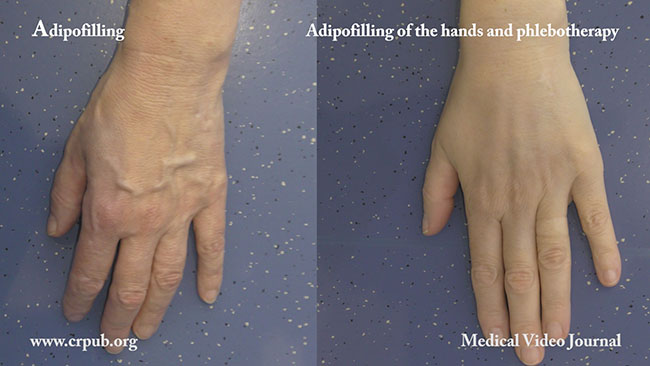 Why do you advise using mepivacaine rather than lidocaine, which is cheaper?

Lidocaine is toxic to the adipocytes and limits the penetration of glucose into the adipose cells.

How do you wash the lipoaspirate?

The lipoaspirate is washed with one or two bottles of lactate Ringer or physiological solution in a flask equipped with a tap, until the washing liquid becomes clear. Washing in the flask removes the local anesthetic and epinephrine from the lipoaspirate.

Is the solution of glucose and insulin that you use for "feeding" always the same, or does it vary according to the amount of Adipofilling suspension that is to be injected or conserved at low temperature?

For quantities of lipoaspirate up to 100 ml, we use 10 ml of a 5% glucose solution with 30 IU of rapid insulin. For larger quantities, we increase the amount of insulin up to about 60 IU. This solution of 5% glucose and rapid insulin is added to the fragmentation liquid. The insulin exerts its action and is partly eliminated by means of sedimentation or centrifugation at 400 RPM for 3 or 4 minutes.

Have hypoglycemic effects ever been observed?

No, but when we use the larger amounts of insulin, we keep some sugar or glucose solution ready.

Can the Adipofilling suspension that is not injected be conserved at a low temperature?

Yes, it came as a pleasant surprise to us, too, when we realized that the procedure carried out by the Adipopimer prevented the volumetric and cellular suspensions from freezing, even at a temperature of -31°C!
In practice, the metabolism of the biological material is simply slowed down. The suspensions are conserved in 1 mL syringes that are immediately ready for use. What we have created is an autologous filler that is economical, light and living!

Is it advisable to perform phlebotherapy and Adipofilling at the same time?

Yes, the Adipofilling suspension exerts a powerful anti-inflammatory action and restores the integrity of the tissues extremely rapidly. Moreover, two esthetic problems are solved at the same time: excessively dilated veins and the loss of subcutaneous tissue in the back of the hand. In addition, we should not forget the trophic action of the fat on the skin.

So the veins are not obliterated?

As is well known, sodium salicylate at a concentration of 12% has a sclerosing effect on the veins of the lower limbs. The veins of the upper limbs, however, are more resistant to the chemical action of sclerosing agents. Our aim is not to close the veins of the hands, but only to reduce their caliber and to strengthen their walls, so that they will not dilate excessively in a hot environment. Our first choice is to use a 6% solution of sodium salicylate in a buffered hydroglycerin vehicle. In rare cases of persistence of venous ectasias, we may use an 8% solution.

Besides the hands, which other difficult areas of aging are corrected in order to complete rejuvenation?

Actually, we are very close to achieving overall rejuvenation. The procedures of elastic lifting of the face and neck without dissection help to reposition excess volumes and skin. Adipofilling enables us to increase deficient volumes, especially in the posterior region of the face. Adipofilling also rejuvenates the forehead by making it rounded. Intradermal Adipofilling allows us to treat lip wrinkles and deteriorated skin of the cheeks and neck. By injecting the cellular suspension immediately beneath the skin, we can make fine volumetric corrections safely, for example in the palpebral regions. When injected intradermally, the suspension has no volumetric effect, but exerts a very powerful regenerative action.
Adipolysis enables us to eliminate small excess volumes from the cheeks.
Rejuvenating the appearance of the eyes is also very important. Today, the elastic thread can be used to elongate the eye without acting directly on the canthus, thereby avoiding risky operations with uncertain outcomes. The elastic thread can also shorten a nose-tip that has lengthened with age, thereby yielding both functional and esthetic benefits.
Finally, our bionic serums containing ionized melatonin and andrographolide enhance the beauty of the skin.